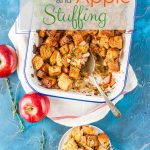 This Cornbread and Apple Stuffing is savoury and sweet with a wonderful soft layer of cornbread stuffing at the bottom and a layer of crispy croutons on top. Perfect to serve alongside roast turkey or chicken. Festive, easy, and delicious! 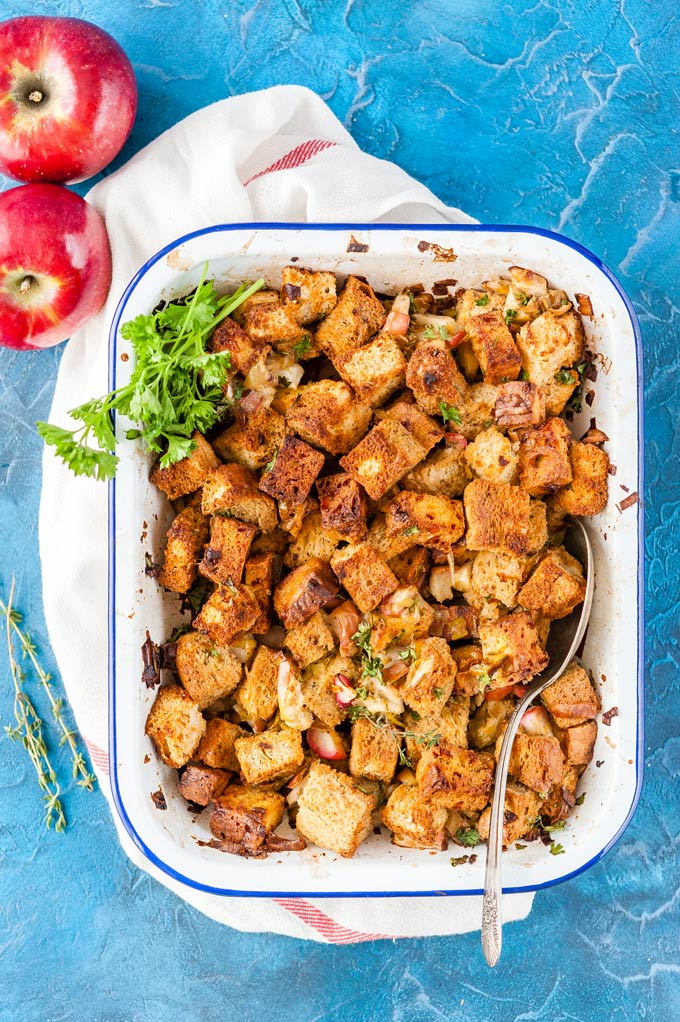 This blog post is sponsored by Ontario Apple Growers. All the delicious opinions are my own.

This post contains amazon affiliate links which means that if you make a purchase after clicking one of those links, I will make a small commission.

My knowledge of bread stuffing is limited by the stuffing served for a Festive Special at our local Roasted Chicken place (Swiss Chalet) and the boxed stuff that my in-laws make for Christmas. Both versions taste the same so I suspect that the restaurant gets theirs from the box also.

I love that stuffing – it’s soft and moist and sort of all mushy. Yet, it’s so particular that I usually eat it only a couple of times and am happy to wait a year before having it again. 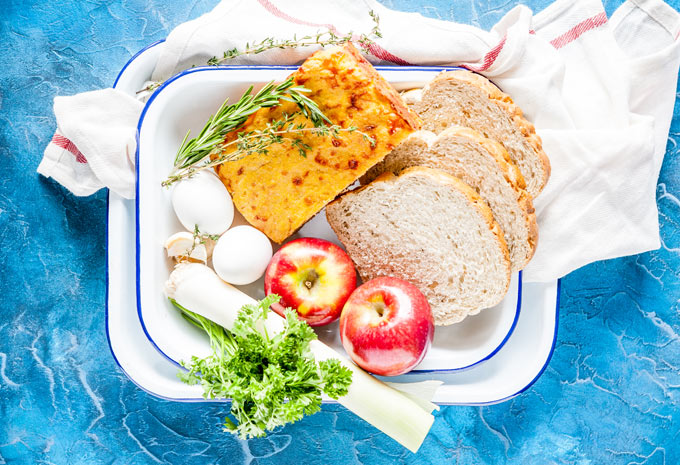 Stuffing that my family actually used for our own Thanksgiving or Christmas Turkey was mostly made of fruits and nuts. I even have a variation of that recipe in my cookbook. If you love chicken with fruit, then you should try my Roast Chicken stuffed with Dried Fruit from The Ultimate One-Pan Oven Cookbook. It’s delicious!!

So, for this Cornbread and Apple Stuffing, I combined those two very different versions. I used a mixture of bread and cornbread together with the fruit. In this case, I used delicious local Cortland apples sautéed with leeks.

As I said, I am not a stuffing expert, so I played by ear when developing this recipe. It is not soft and moist but it’s on purpose.

That soft and mushy bread stuffing is great but I like the crispiness of this Cornbread and Apple Stuffing. It’s almost like eating croutons. And who loves eating croutons by the handfuls? No-one? Just me? Ok, moving on… 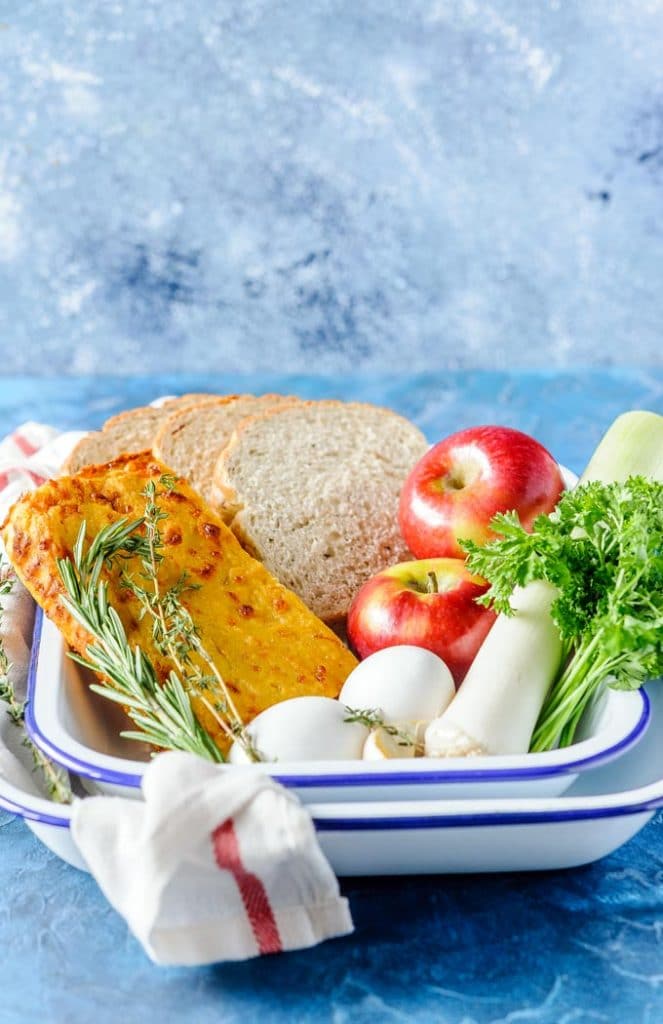 Ingredients in Cornbread and Apple Stuffing

This recipe is great for managing food waste as you don’t even need to buy a lot of expensive ingredients. Use some leftover bread, you don’t need a lot, so don’t buy a whole loaf, just take a few slices of any white bread you have.

Cornbread is a great side for any family meal, including Thanksgiving or Christmas dinners, so make a big batch and use a little bit to make the stuffing. No need to waste the rest of the cornbread.

I love using local apples for this Cornbread and Apple Stuffing because although apples are season-less, they are particularly great in the fall and early winter right after harvest. Apples are also very affordable.

Apples are great for snacks and desserts, so most likely you will have no food wasted when buying a bag of apples.

FUN FACT: I recently visited Algoma Orchards and their apple sorting facility. It turned out that most apples that are sold in bags, are not covered in food-safe edible wax. That wax coating is usually added to the apples sold individually. 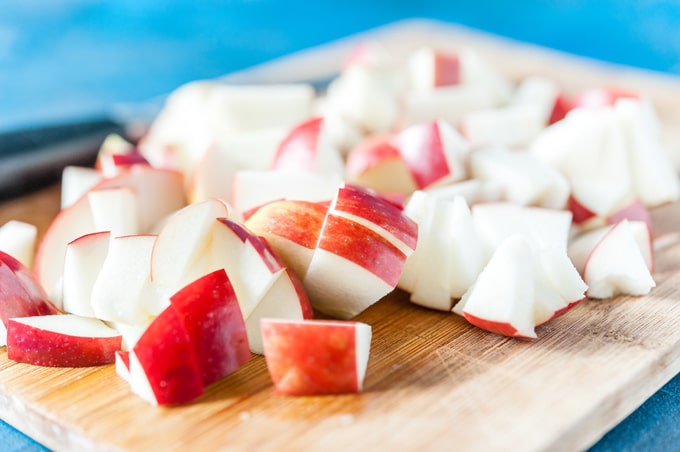 How to make Cornbread and Apple Stuffing

It is not difficult to make Cornbread and Apple Stuffing but it requires a few steps. I tried making this bread stuffing with omitting a step or two and although the flavour was great, the texture wasn’t as good. 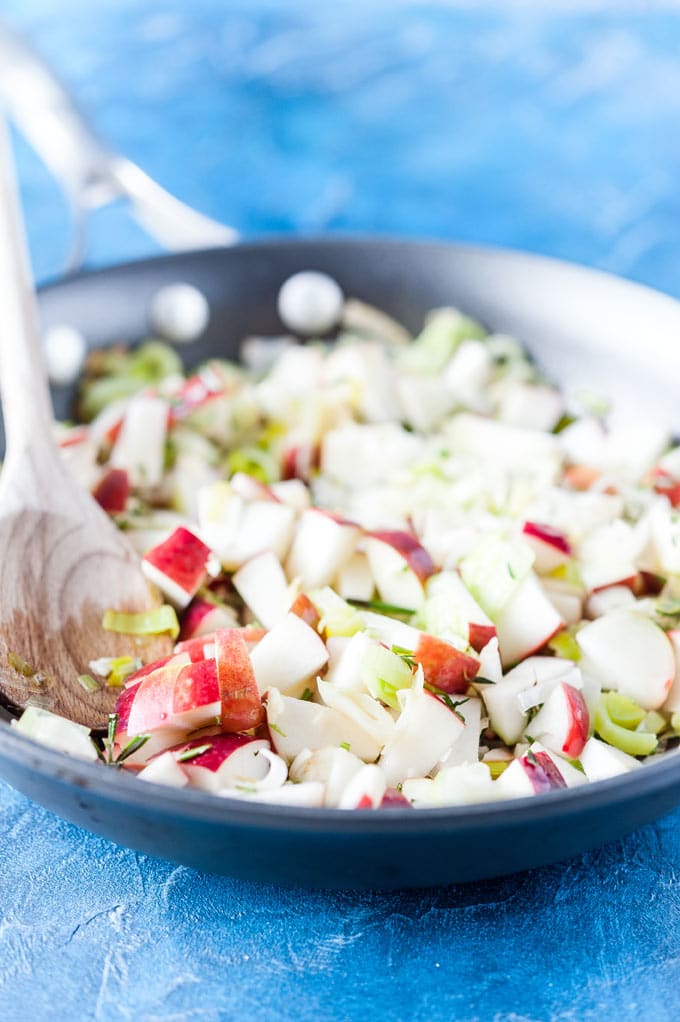 Texture of Cornbread and Apple Stuffing

As I mentioned earlier, I prefer the stuffing that is crispier and is in pieces (croutons). I think it pairs well with gravy and other sides.

The bottom layer of this Cornbread and Apple Stuffing is soft and moist, while the top layer has crisp and crunchy seasoned croutons.

If you prefer softer stuffing then you can: 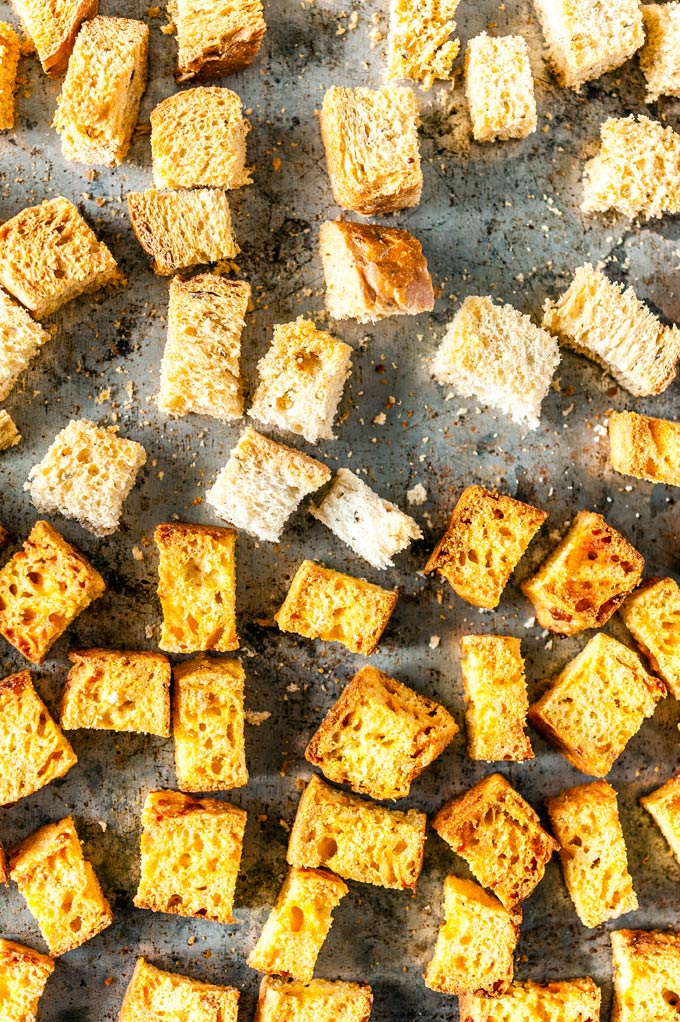 Variations and substitutions for Cornbread and Apple Stuffing 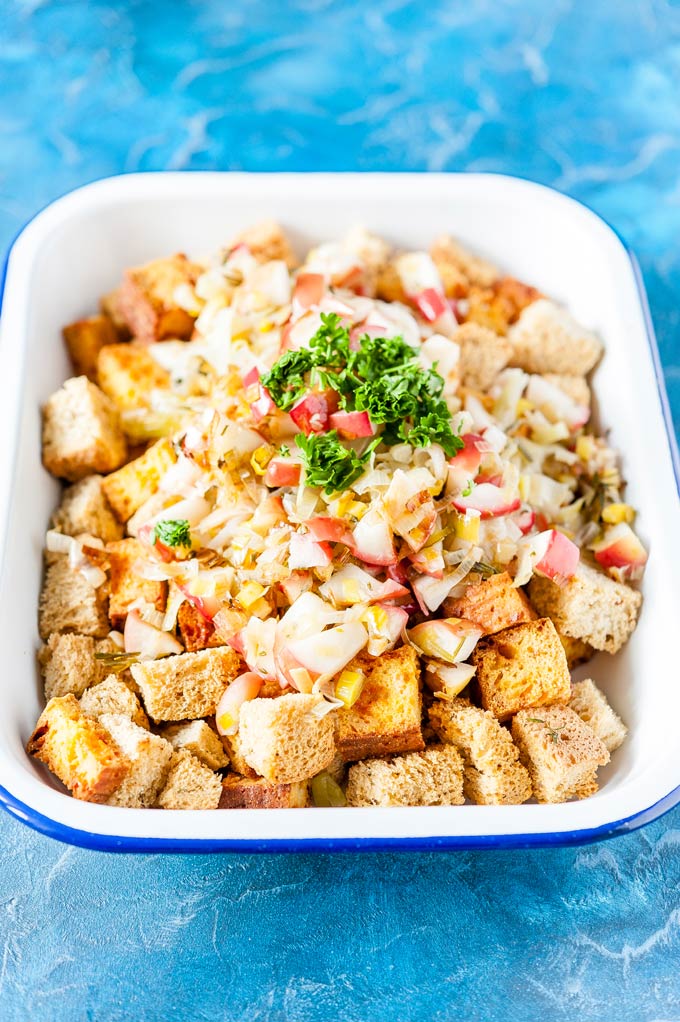 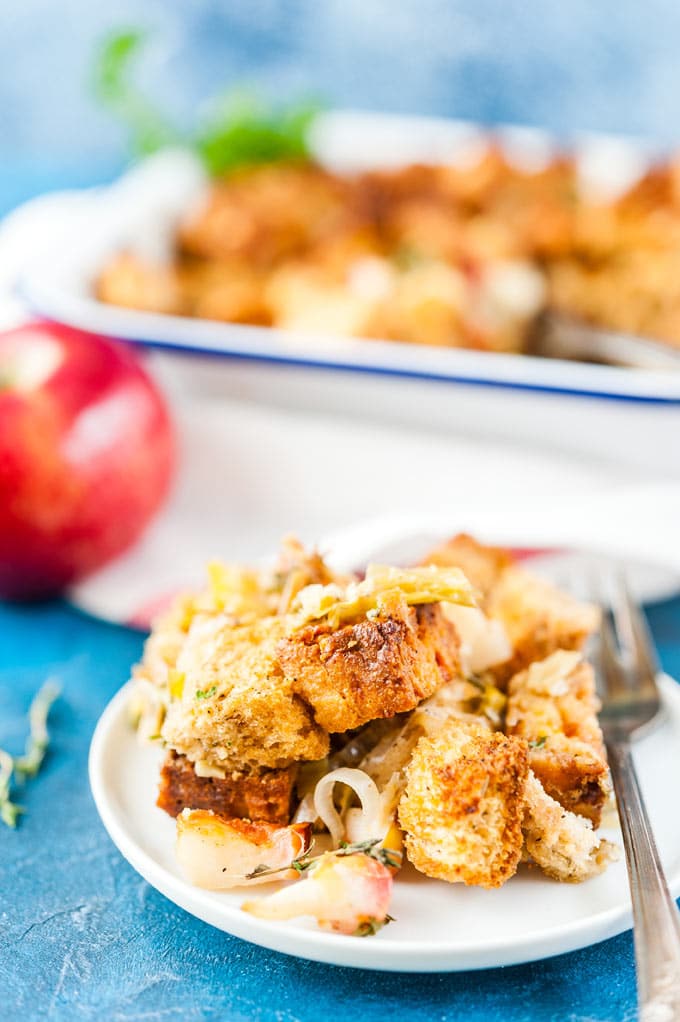 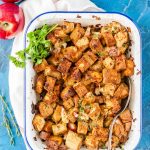