These Giant Double Banana Pancakes are full of mashed banana, yogurt, and healthy oats. They look pretty and impressive and are a perfect sunday breakfast. 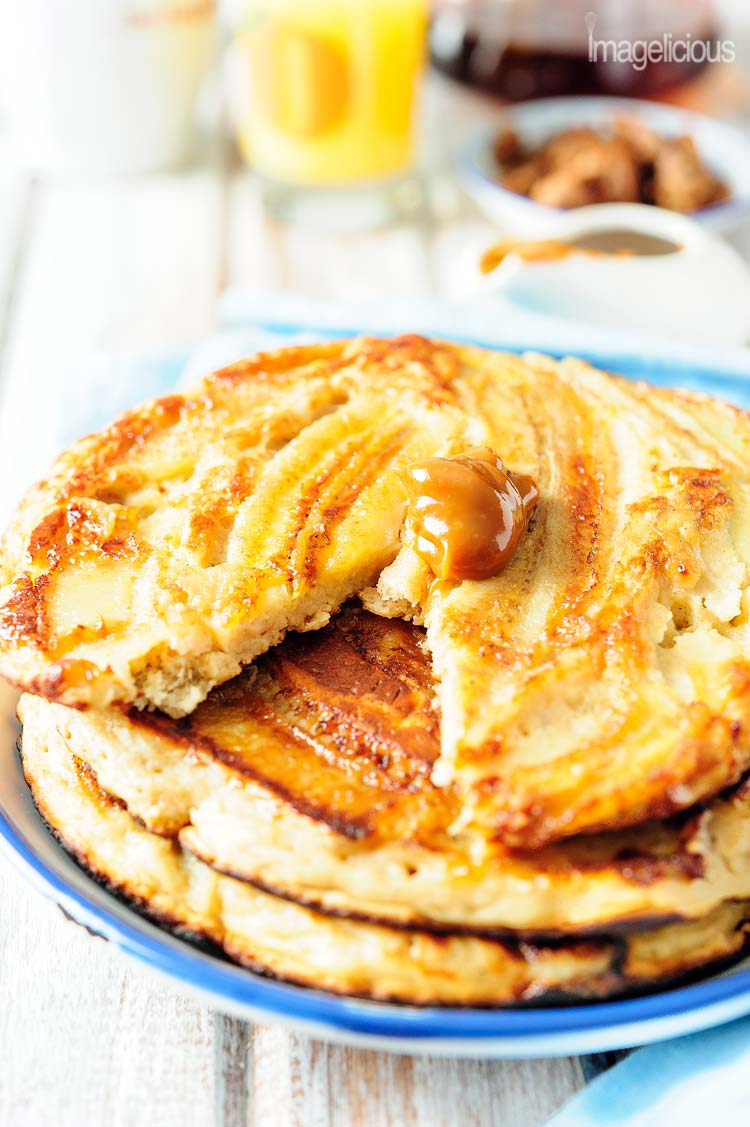 Just like with my last post of 2016, I feel that I should write something profound in the first post of 2017. Maybe something about the future and goals and peace on earth. Or maybe something about my family and how last year put everything in perspective. Instead, I keep thinking about what New Year used to mean to me when I was a child. It’s the New Year’s Eve and New Year celebration that is the most important and anticipated holiday for Russians. It’s our version of Christmas with food, family, friends. With Santa bringing presents and festivities going for hours on end. With drinks and games and tv specials. With fireworks and toasts and memories.

January 1st is almost as important as December 31st. Tired and hungover and happy and still full of belief in magic, we eat the leftovers – tradition January 1st breakfast. Mayo laden salads, herring, sprats, cheese, deli, caviar – it’s all consumed for a few days after the celebration thus making such common New Year resolution of eating healthy a non-existent phenomenon for many Russians.

I don’t believe in New Year resolutions. They rarely work. Also, why this arbitrary January 1st date? Why not December 1st or at least the first Monday of the month? I don’t start eating healthy in January, instead I try to eat healthy-ish throughout the year. I still eat sugar and butter and bread but I try to not over-indulge. I try to use less oil or cheese or cook vegan. And if I feel like I want to eat some cake or cookies or a nice grilled cheese sandwich, then I eat them and don’t feel guilty.

So, as the world consumes tubs of non-fat yogurt with sugar-free granola this first week of January, I eat these delicious Giant Double Banana Pancakes for breakfast (after finishing my traditional mayo salads). They are full of plain yogurt,  mashed banana and healthy oats and cinnamon. I suppose whole wheat flour could be used to make them even healthier, but I don’t usually have it in my pantry so I can’t comment on that. 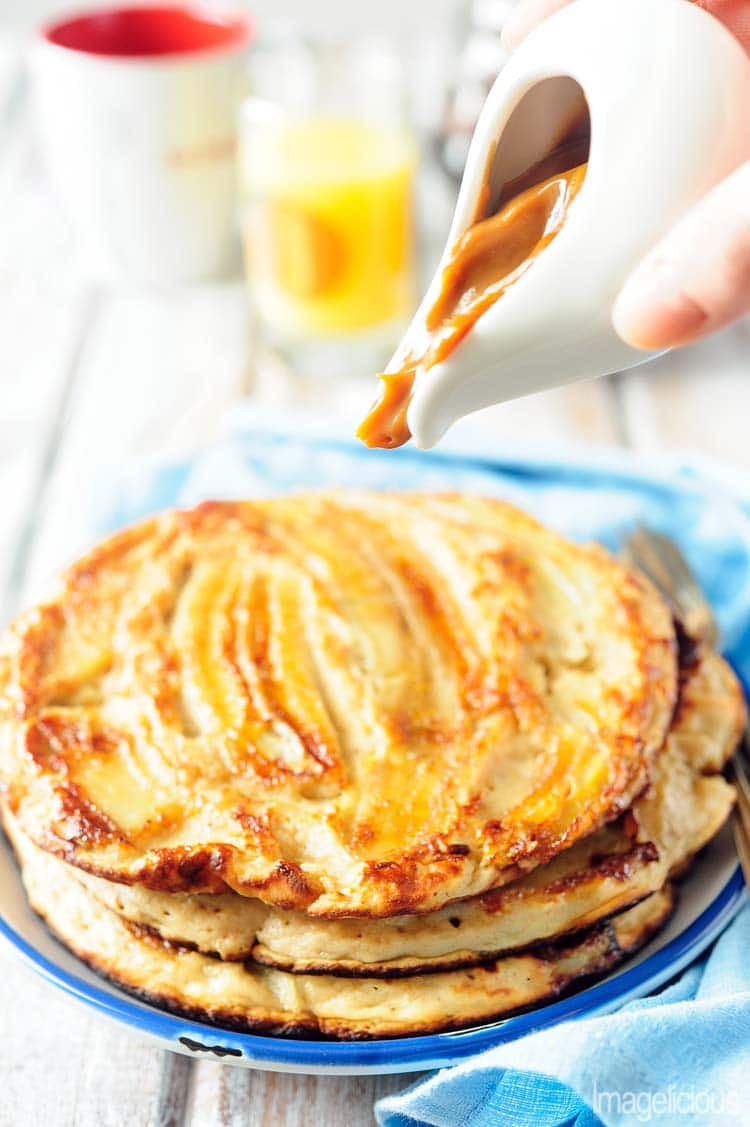 I wanted to add even more banana flavour to the pancakes by adding whole pieces of banana to them. Instead of making regular size pancakes and adding sliced banana rounds on top, I decided to make Giant pancakes and placed long slices of banana – they look pretty and impressive and I just wanted to make something a bit different. I used a small 8-inch pan and made 4 giant pancakes. I served them with Dulce de Leche and this breakfast was reminiscent of the classic English Banoffee pie. 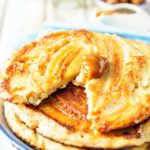 Since the pancakes take almost 10 minutes each to make, keep them warm in the oven at 200-225F.
Tried this recipe?Leave me a comment with a star rating!
Mention or tag @Imagelicious 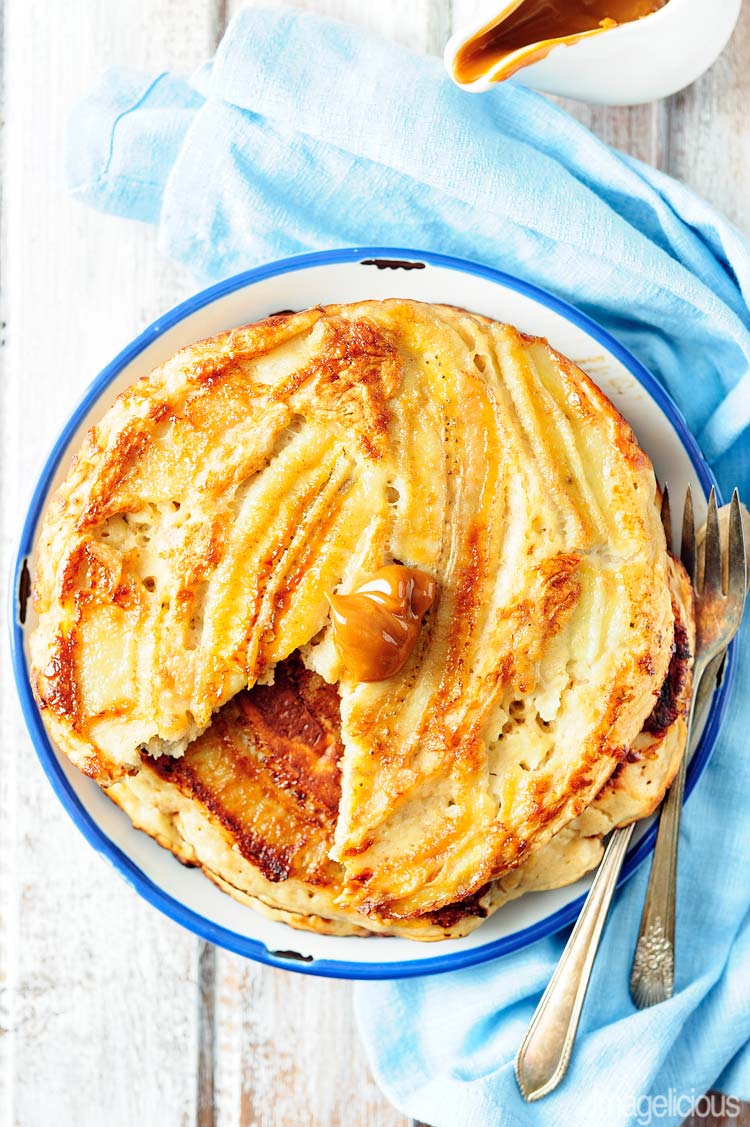