It’s difficult to reason with cats. They understand everything but they choose not to listen to you and be stubborn.

I came home on Friday after work to my cat asking to go outside for an afternoon backyard stroll. I tried to explain to her that it was cold and windy and overall miserable, but she wouldn’t have any of this. She asked (no, demanded!) to be let out. I showed her a weather channel app on my iPhone, I pointed to the leaves blowing in the wind outside, but she shook her head. In the end, I lost that battle with a two cats to one human score. 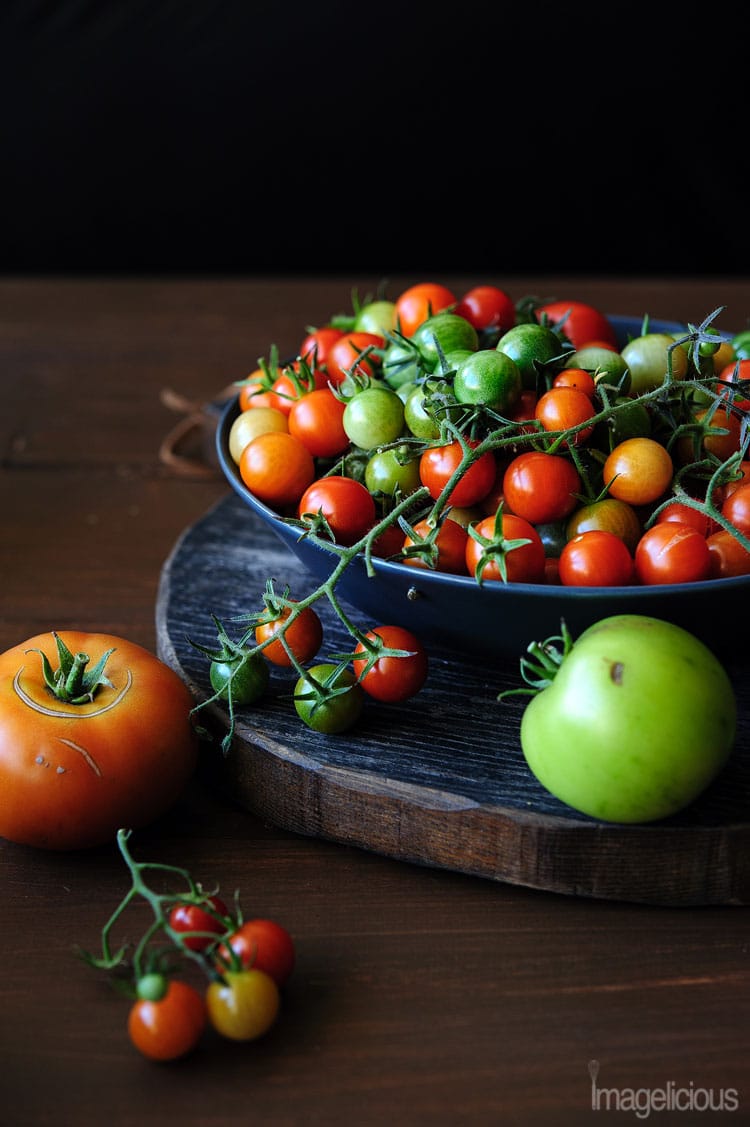 It took them less than five minutes until they felt betrayed by the sun that tricked them into wanting to go outside. The sunshine from inside the house was so bright and welcoming, yet there was no warmth on the patio floor, no soft caresses of the greenery, no happy and cozy embraces from the air. Instead, their fur was roughed up by the wind and the cold grass tickled their paws. After only a few minutes they had enough. They asked (no, demanded again!) to go home where the couches were soft and the air was safe.

I, however, had other plans. I saw that despite the cold, despite it already being the middle of October, there were still a few tomatoes on the vines desperately clinging to the stalks, and against all odds still ripening and changing colour. 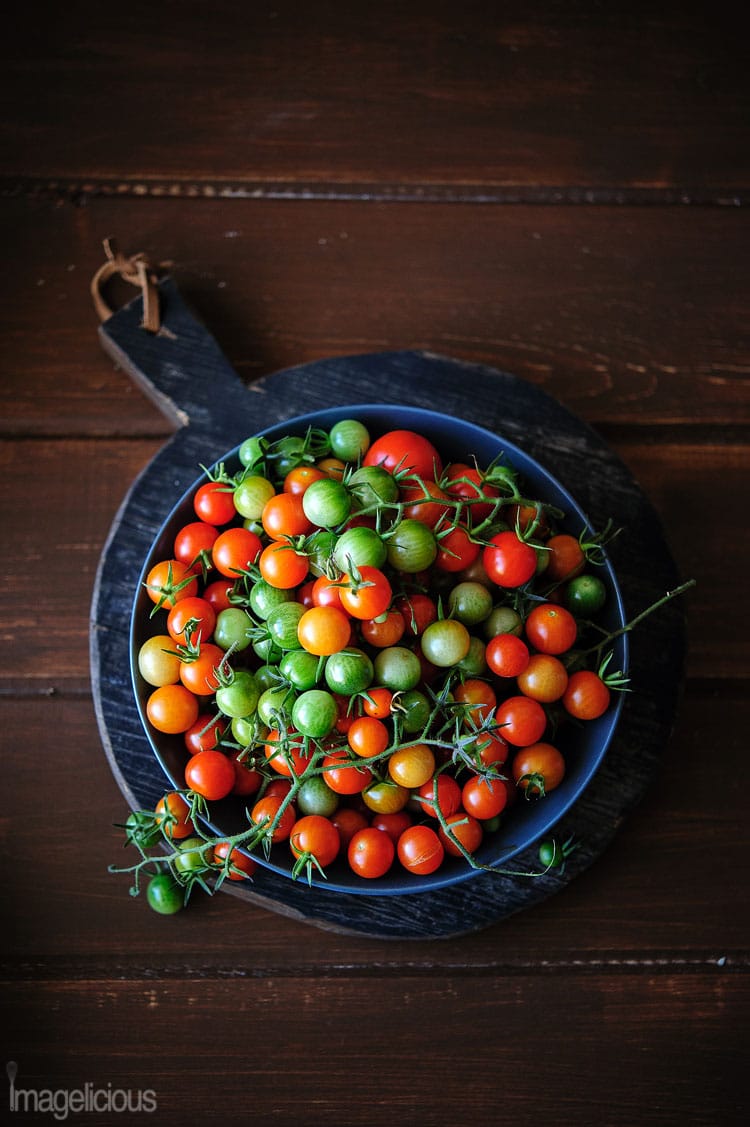 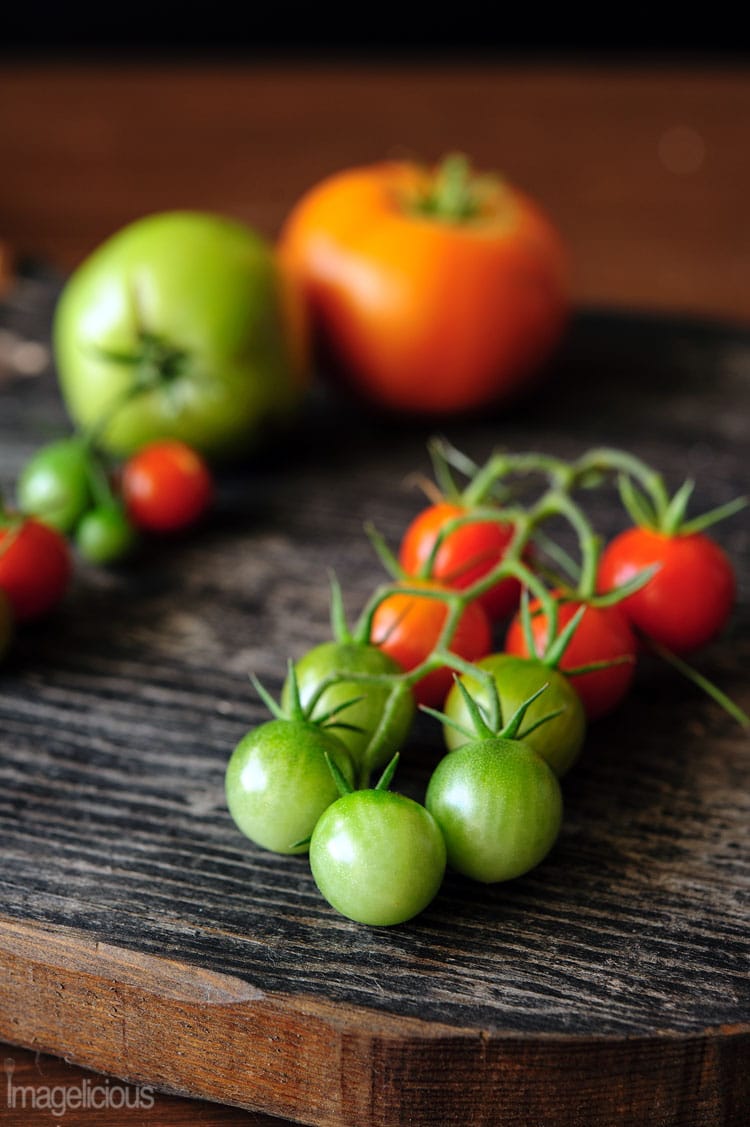 I grabbed a bowl and started picking the fruit that turned red; and then I decided that green tomatoes also needed to have a better fate. I’ve never cooked with green tomatoes, but I figured I’d be able to make something. And so I did. I roasted a mix of red and green tomatoes with some olive oil, salt and fresh thyme. High temperature of the oven softened the hard flesh and brought out the natural sugars. I tried the green tomatoes, but they were still sour, so I mixed them with some ricotta and cheese and the sauce turned out really good.

I have to warn you, though, the flavour is still quite astringent and distinct. I liked it. It was bright and different and unlike anything I’ve tasted before, but my husband did not like the taste on its own. He needed more familiar and comforting sweetness of regular tomatoes, so he mixed my roasted green tomatoes with a regular tomato sauce for his pasta. 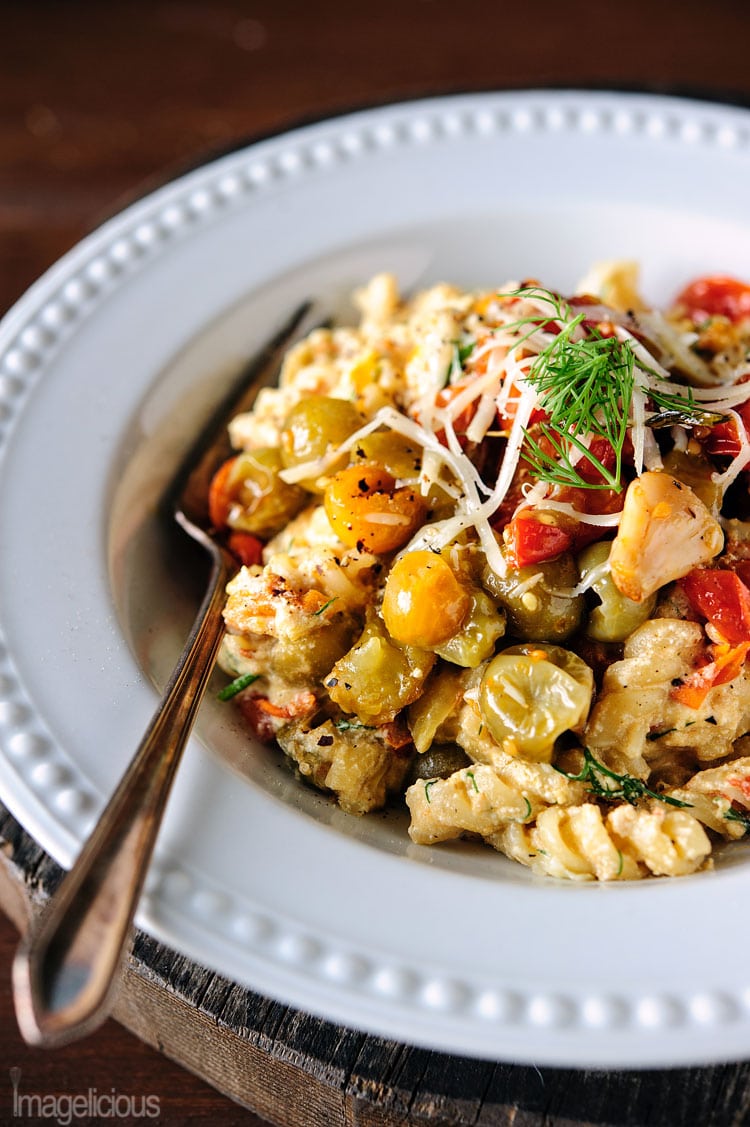 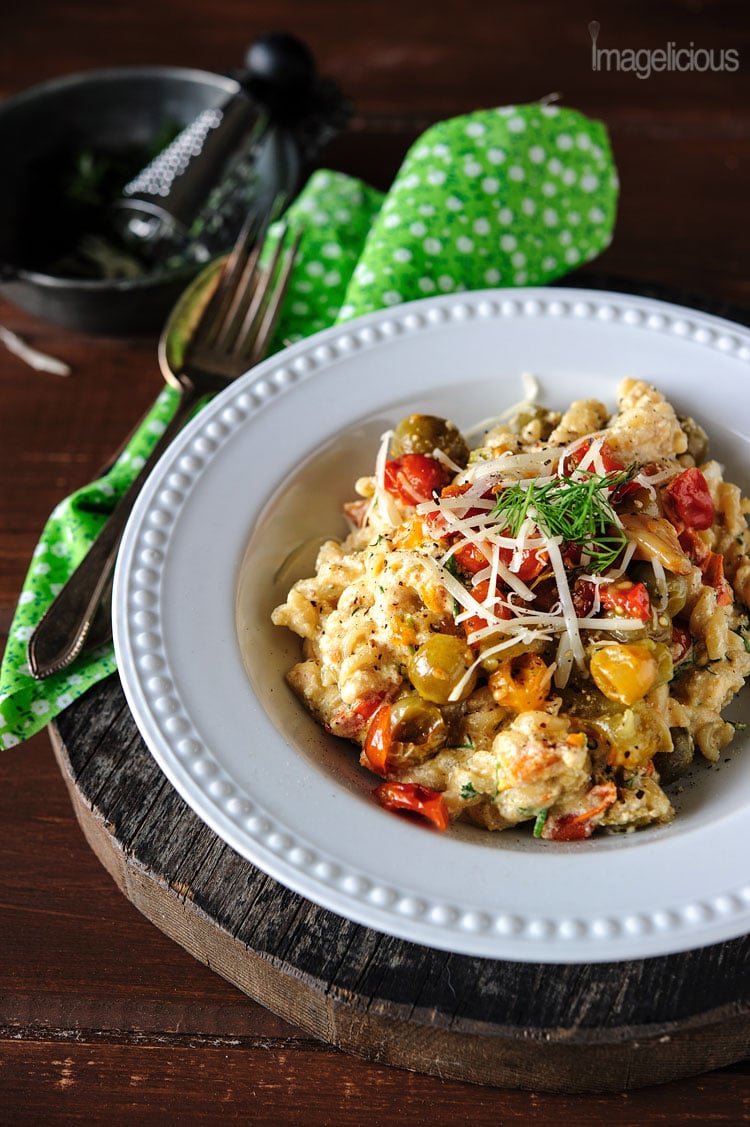 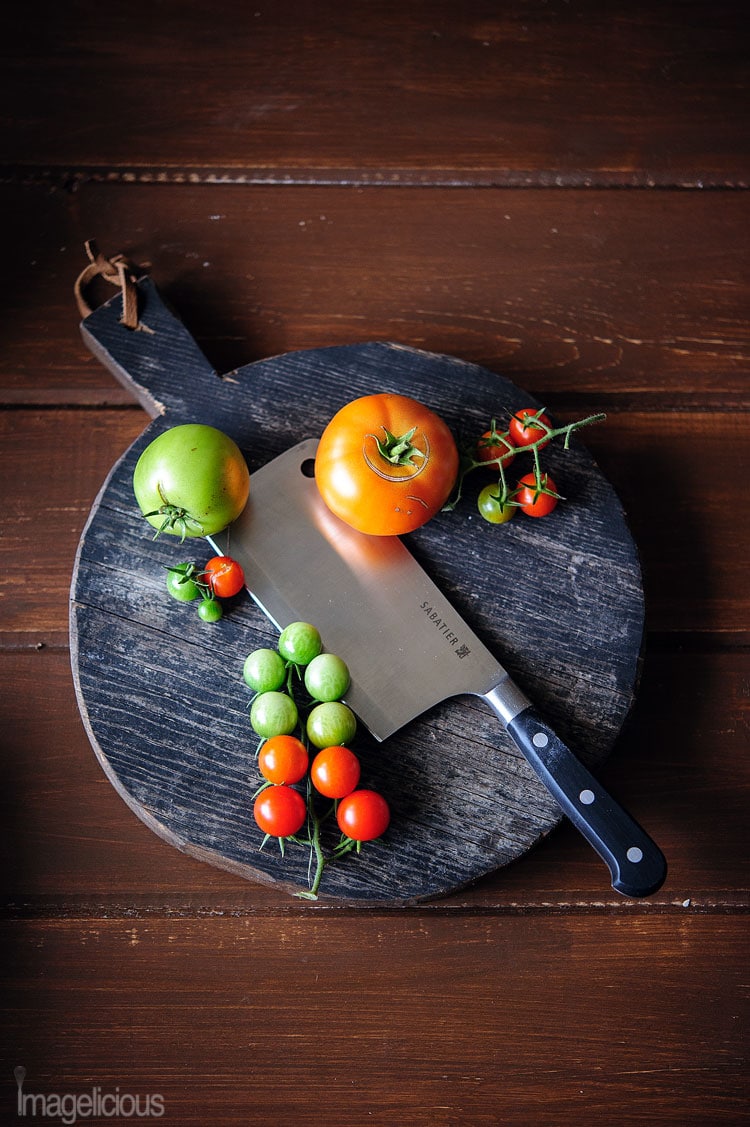 Now, about the giveaway. I received a Sabatier 6-inch cleaver in September to review and I’ve been using it a lot over the past weeks. I’ve never used a cleaver before, so I wasn’t sure what to expect. I went online once I got it to do some research and I found out that there were two types of cleavers: meat cleavers and vegetable cleavers. Meat cleavers are heavy, have a long, wide blade and are usually blunt. Vegetable cleavers (I’ve seen them called Chinese and Japanese cleavers) are much smaller with a narrower edge and are generally considered to be multi-tasker knives, used for chopping, slicing and even picking up the produce from the board with the wide edge.

When I started using this cleaver in the beginning, I did not like it. The knife was very dull and difficult to use. It took two rounds of sharpening to make the edge finally sharp and usable. Updated on November 16, 2015: It seems like there could have been a problem with my particular knife as other reviews that I read all raved about how sharp it was. Not a big deal as that issue was easily fixed. End update. I’ve tested the knife while chopping, slicing, dicing and sort of hacking. I like the curve of the blade a lot as it’s perfect for chopping herbs and garlic with the rocking motion. The knife is great for making persillade or gremolata, which is my favourite use for this cleaver. It’s also super useful for crashing or smashing whole garlic cloves as well as hacking small pumpkins in half. It’s really convenient for scooping the ingredients and dropping them into a pan with the edge. I also like the weight of the knife and how sturdy it is. It’s not light, but not heavy either.

Even though it’s supposed to be used for slicing vegetables too, it did not work for me. Yes, unlike a knife with a serrated edge, it can be used to slice onions, but the wide edge did not give me as much control as I usually get from my chef knife. So, if there’s only a small amount of vegetables to chop and I don’t want to switch between different blades, I’d use this cleaver, but it wouldn’t be my first choice. What I really don’t like about it, is the handle. For some reason it does not feel comfortable in my hand and I get tired using the knife. I feel like my hand constantly slides towards the blade with its hard edges. I wish the handle had more curves and was a bit more rounder.

Disclaimer: Please note that I received this knife in exchange for the review, but all opinions are my own. 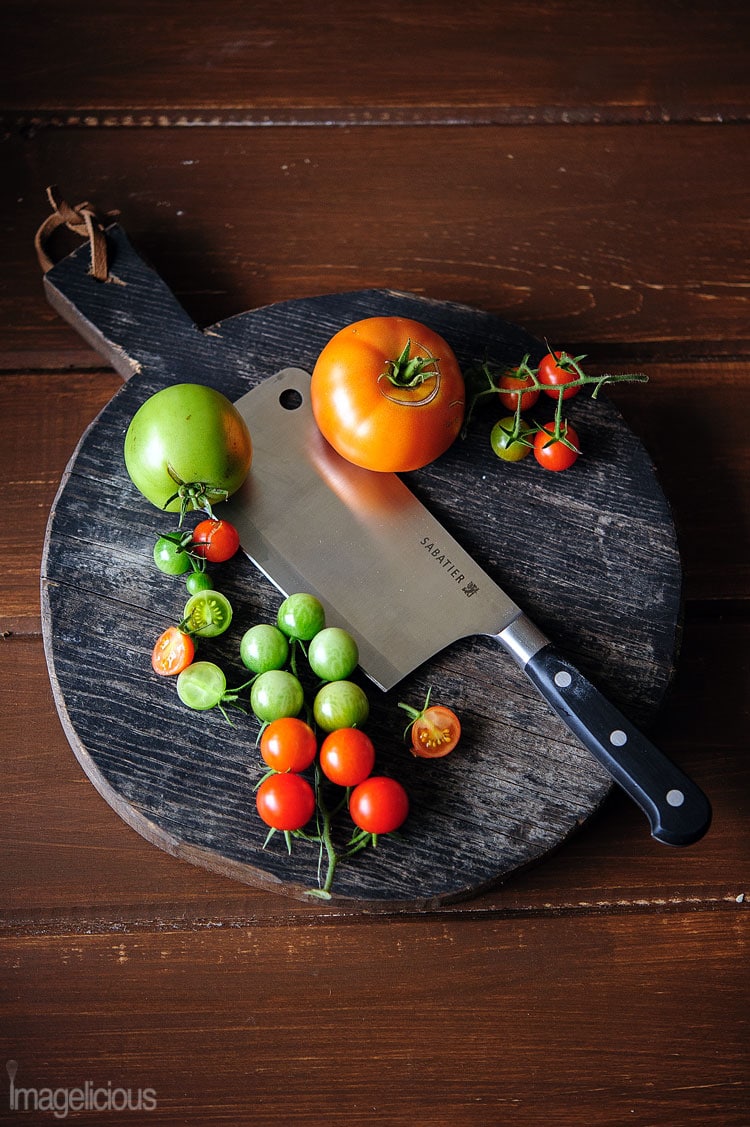