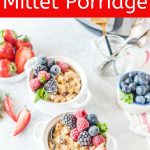 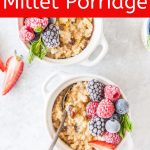 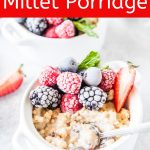 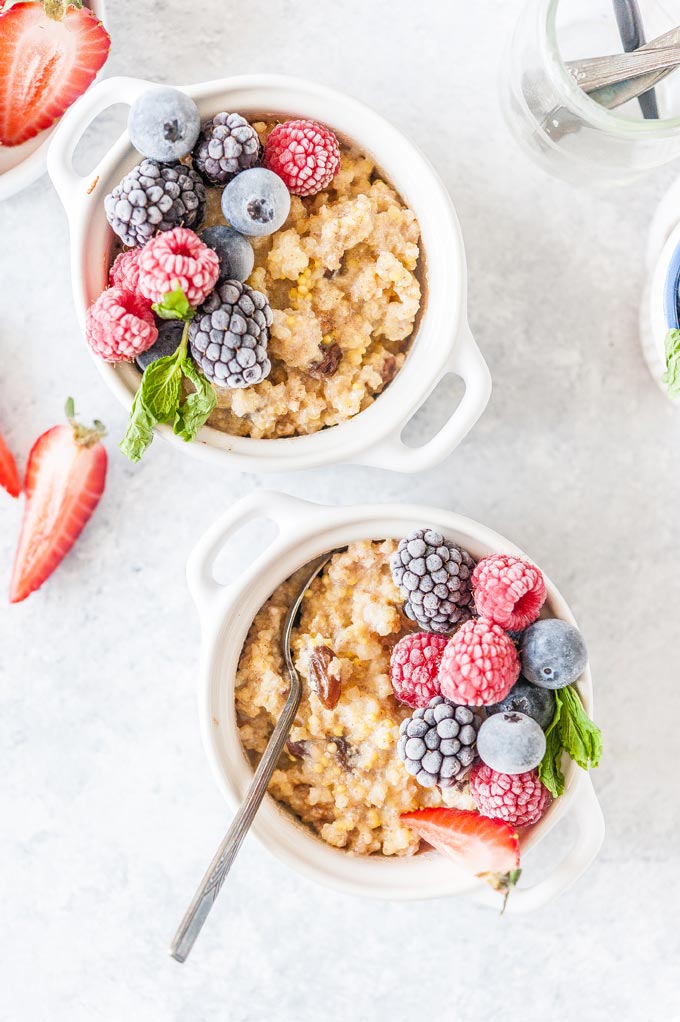 I don’t usually write long opuses on my blog but once in a while I do. It is not a recipe site. It is a personal food blog with personal memories and stories. So, today I share another personal story from my childhood. Feel free to scroll down or use a Jump to Recipe button.

There’s absolutely no reason why a child would love porridge, but I did.

My favourite was Millet Porridge and I begged my mom to make it for breakfast on the weekends. The texture of the little spheres dancing on my tongue was unusual and something that I longed for. My mom didn’t make it often as it usually took a long time to cook.

Rice porridge (known as rice pudding in North America) was also rare, just as any rice dish in our family when I was little, so I loved the milky, creamy liquid surrounding all the rice grains, sweetened with a little bit of jam.

Oatmeal was the most common breakfast I had when I was little, and I did not mind. I loved the routine and stability of knowing what’d I’d eat. The most popular brand of oats in Russia was called “Hercules” and up until well into my teens, I actually thought that Hercules, besides being a character in Greek myths, was the name of the breakfast cereal. Hercules porridge it was called.

And then there was Farina Porridge, most commonly known as Cream of Wheat now. It wasn’t as common as oats in my family, but I ate it often. I had a complicated relationship with it. Some days I couldn’t get enough of it and some days I hated it – the texture was too smooth, too creamy, too uniform.

But all of this love for breakfast porridge happened after I turned six years old. Before that, just as most kids I threw tantrums and cried and refused to eat porridge on many occasions, which was kind of a big deal since porridge was one of the main items for breakfast back in the day in Russia.

A few weeks before my sixth birthday my family, along with our friends, went to Abkhazia, region on the eastern coast of Black Sea. To my almost six year old self the trip was the biggest adventure I could ever imagine. We travelled for a few days on a train, which was an adventure in itself, but then we arrived and there was this vast, unending sea, exotic fruits and trees, foreign people, and foreign language, and unusual food.

Overwhelmed by unpolluted air and eye-burning colours, my friend and I weren’t behaving well (according to my parents). Adults, who at that point were eight or seven years younger than I am today, having escaped from grey rainy Moscow, drunk with freedom and young and fruity local wine wanted to have some fun while trying to supervise their unruly children.

One of those days, desperately trying to get the kids to eat breakfast, the adults gave up; this is when the owner of the house we were renting happened to stop by. She picked a few half-inch pieces of local cheese and unceremoniously plunked them into my porridge bowl.

I watched mesmerized as the cheese oozed and melted into the hot cereal. I took a spoonful of sweet and salty, marvelling at the contrast in tastes, temperatures, and textures. I was a convert.

Since then I loved porridge. I loved millet, buckwheat, rice, pearl barley, farina, oats. I liked them all, as long as they were hot and slightly sweetened and studded with a few pieces of salty cheese. 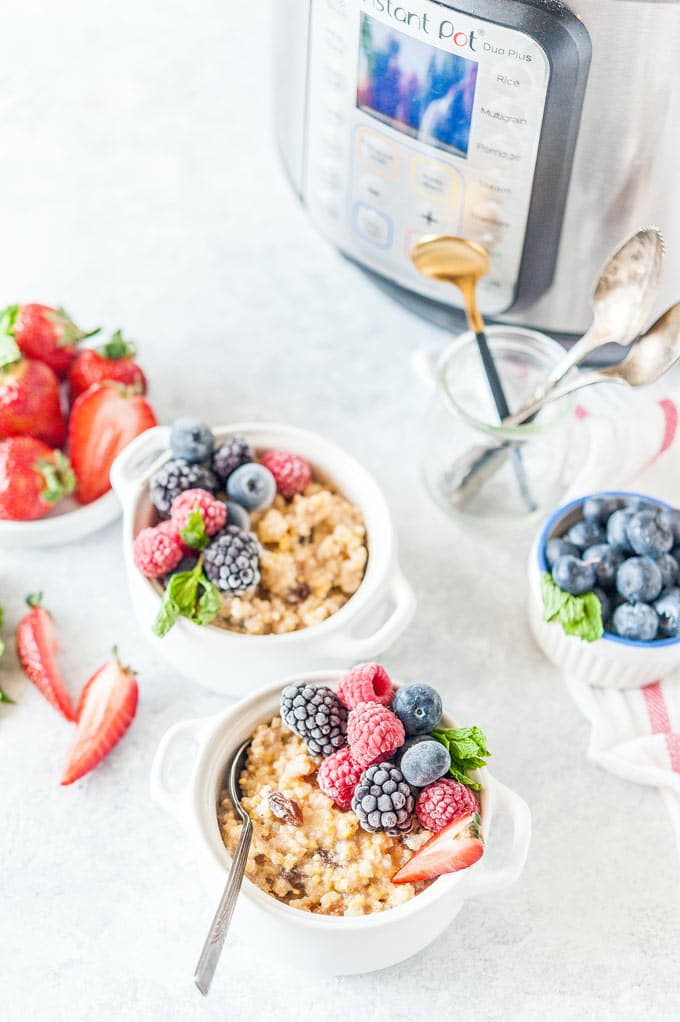 Millet Porridge was one of the first things I cooked in my Instant Pot. It didn’t work. I was disappointed.

Millet takes a long time to cook on the stove and I actually have never made it myself. The idea of spending an hour stirring it just never appealed to me.

So, when I got my Instant Pot more than one and a half years ago, I boldly decided to adapt Oven-Baked Millet from my cookbook, The Ultimate One-Pan Oven Cookbook, for Instant Pot. It was a disaster.

I had this vision of making individual ramekins of Instant Pot Millet Porridge. What I didn’t realize was that milk under pressure bubbled up, milk under pressure with quick pressure release exploded. So, after opening my electric pressure cooker I saw all the milk on the bottom of the pot and not in the porridge.

Also, since I was just a beginner user, I kept trying to make my Millet Porridge in an instant. I was hoping that Instant Pot would live up to its Instant name.

Now I know better. The beauty of cooking in Instant Pot isn’t about food cooked in an Instant, it’s not even about faster cooking (although sometimes it is). It’s mostly, at least for me, about the convenience of cooking.

You can read and article I wrote, 7 Things You Need to Know About Instant Pot, to find out more about cooking in electric pressure cooker.

Just as with cooking in the oven, as I described in The Ultimate One-Pan Oven Cookbook, using an electric pressure cooker lets you do other things while the food is cooking. You are free to go play with your kids, spend time with family, or read a book.

More than a year later with all the experience and knowledge that I picked up along the way, I decided to tackle Instant Pot Millet Porridge again. This time I took a completely different approach.

I now use a bigger container so that all the milk stays inside. I also cook for longer. And finally, I do a natural pressure release which means that the temperature cools down gradually and milk gets time to settle instead of bubble out of the pot.

This Instant Pot Millet Porridge is lightly sweetened, creamy, healthy, and delicious. Great alternative to oatmeal or rice pudding. It can be served for breakfast, afternoon snack, or as a healthy dessert. It is also naturally gluten-free 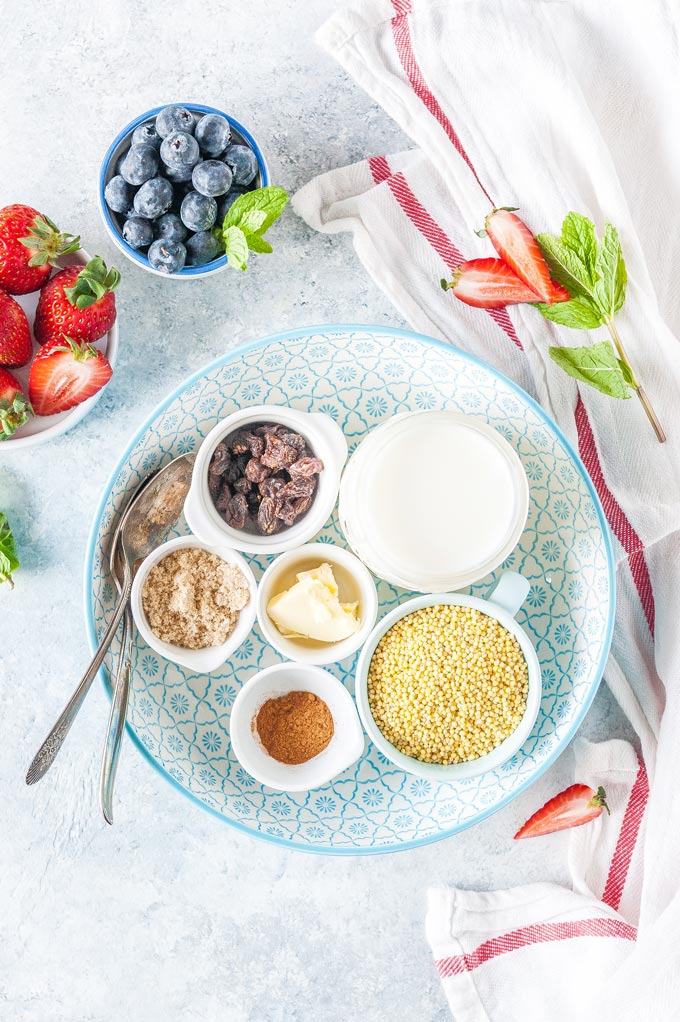 As you can see, except for Millet you most likely already have all the ingredients to make Instant Pot Millet Porridge.

Where to buy Millet

Millet is very popular in Russian cuisine so I usually buy mine at Russian grocery stores. But it is actually very widely available and can be found in most major supermarkets. Just check a specialty section, often organic section in your local store.

The most popular brand would be Bob’s Red Mill Millet but there are other brands also, you can find them online on Amazon.

If you aren’t ready to commit to a full bag of millet then check out your local bulk foods store. In Canada millet is available in Bulk Barns. 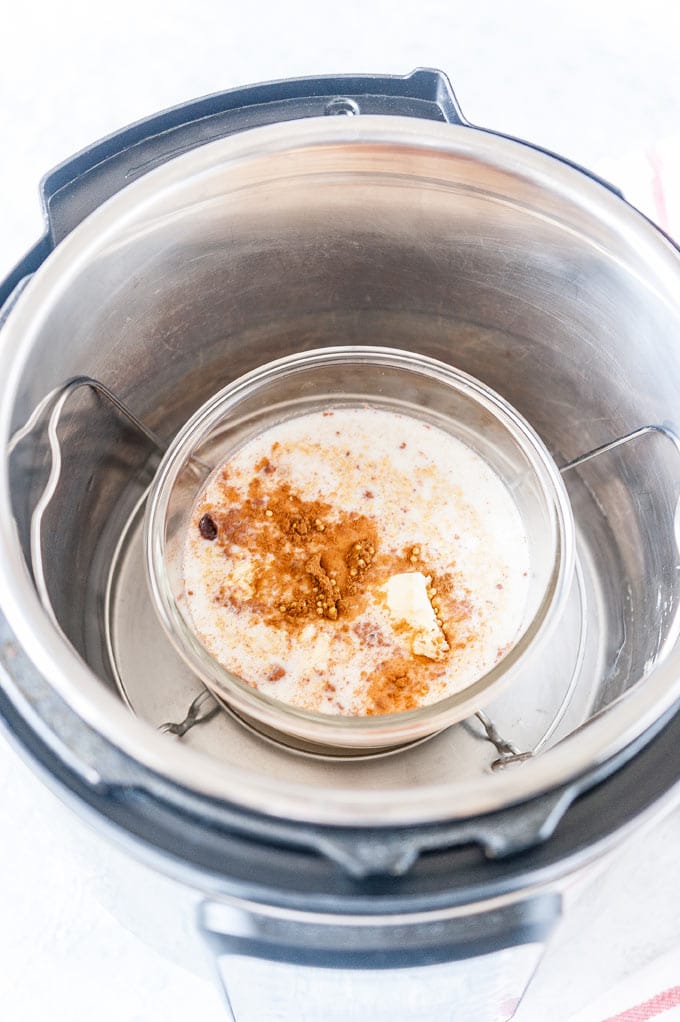 The method to cook this porridge will be Pot in Pot or PIP. What it means is that you are putting a pot inside your Instant Pot.

I have been using different oven-safe glass bowls inside my Instant Pot for many months now without any problems, however, official Instant Pot warns that glass should not be used in Instant Pot. So, use at your own discretion!

If you use different container in Instant Pot then timing will most likely change as different materials conduct heat differently. I have not tried any other containers to make Millet Porridge so I cannot comment on different timings.

I use the following containers:

I prefer the Lock&Lock container as it’s smaller than my Anchor bowl but I tried them both while developing the recipe.

Millet Porridge tastes a bit similar to rice porridge (or rice pudding). You can taste each individual grain just like with rice but each sphere is also soft. In this particular recipe millet has a bite to it. If you prefer smoother and softer texture, then add 1-2 extra minutes to cooking time. 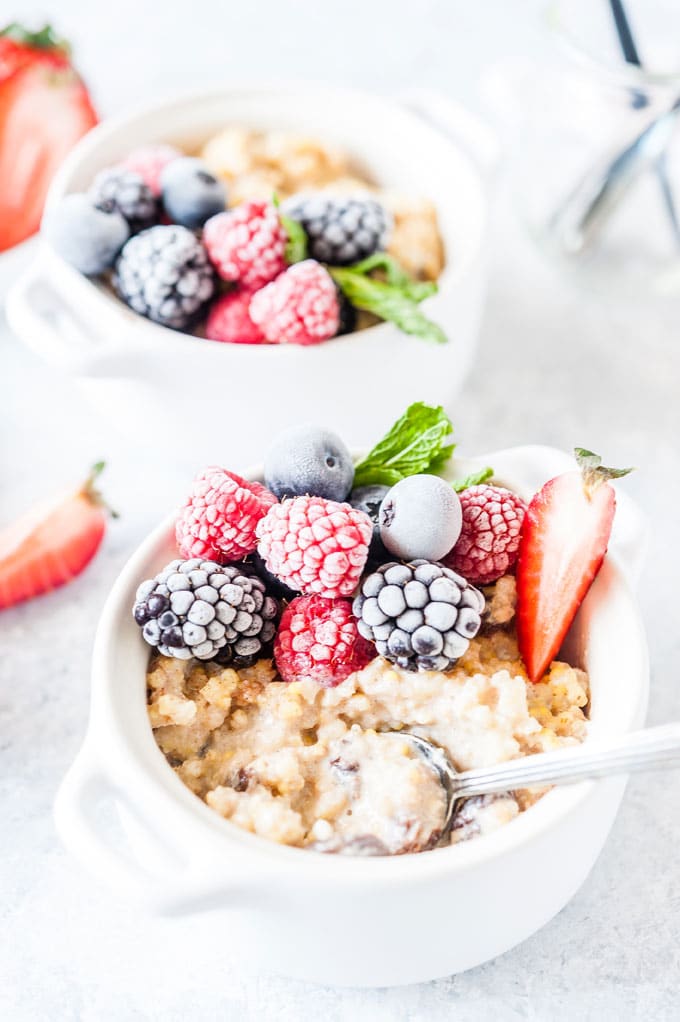 I did not know about Rice Pudding until just a few years ago. For me, it was always called Rice Porridge. So, when I started developing this recipe, I did an extensive google search on pudding vs porridge.

And the result is that Millet Porridge is pretty much the same as Millet Pudding. There were a few articles that mentioned pudding as a dessert food and porridge as a breakfast food but the recipes were, well, the same!

So, whether you call it a Millet Porridge or a Millet Pudding, it doesn’t matter. Perhaps call it a Pudding if you are trying to convince a picky eater to eat 🙂 Sounds more delicious, right?

Can you reheat Millet Porridge?

If you made too much and had to refrigerate it, then you can definitely reheat it the next day. It will not be as fluffy as when it’s just cooked but it will still be delicious.

You most likely can reheat in a microwave but I do not own one so I can’t provide the directions. I reheat millet porridge on the stove. Transfer the porridge to a non-stick pan, add a little bit of milk, cover with a lid, and reheat on low. You definitely need more milk as it absorbs into the millet in the fridge and without it the porridge will be too dry. 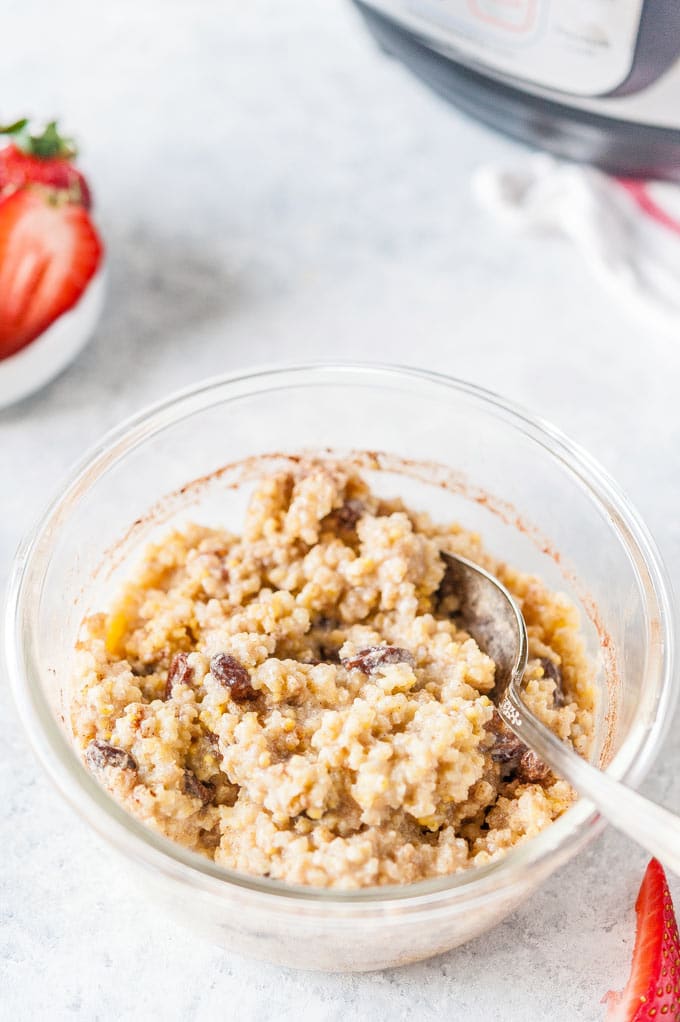 Can this recipe be doubled?

This recipe can be doubled, however, the cooking time will be different. Unfortunately, I was not able to nail down the exact cooking time for when the recipe is doubled. Most likely you’d need to add about 3-5 extra minutes but I cannot be fully sure.

When I tried doubling the recipe, the original timing didn’t work, so I added an extra 5 minutes to great result, however, because of the double pressure release and pressure build times I can’t guarantee that extra 5 minutes is enough or too much/too little. 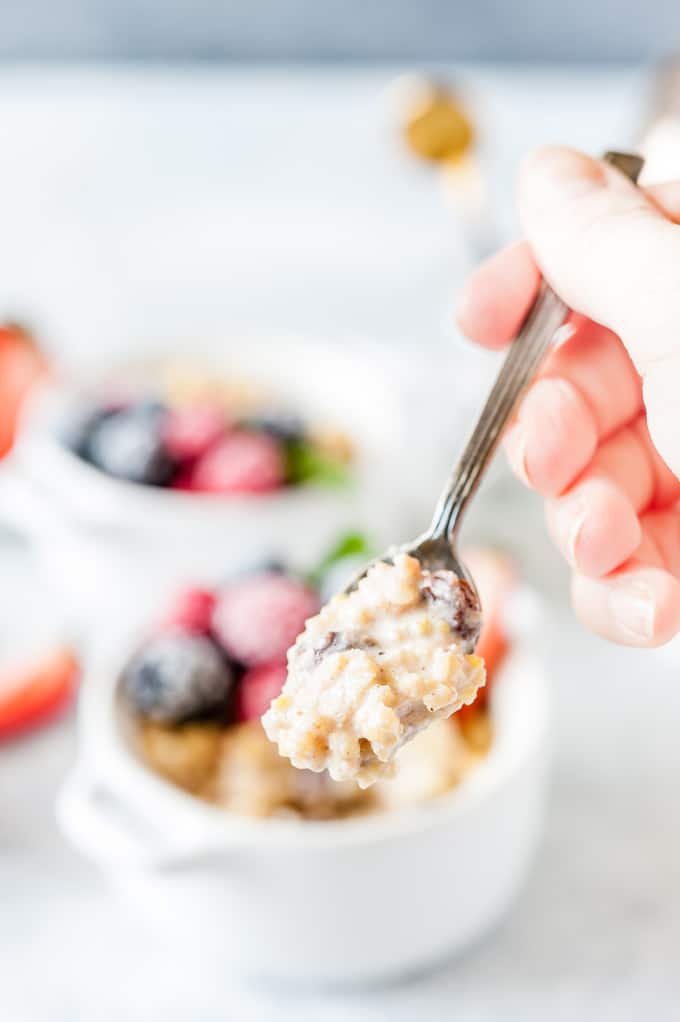 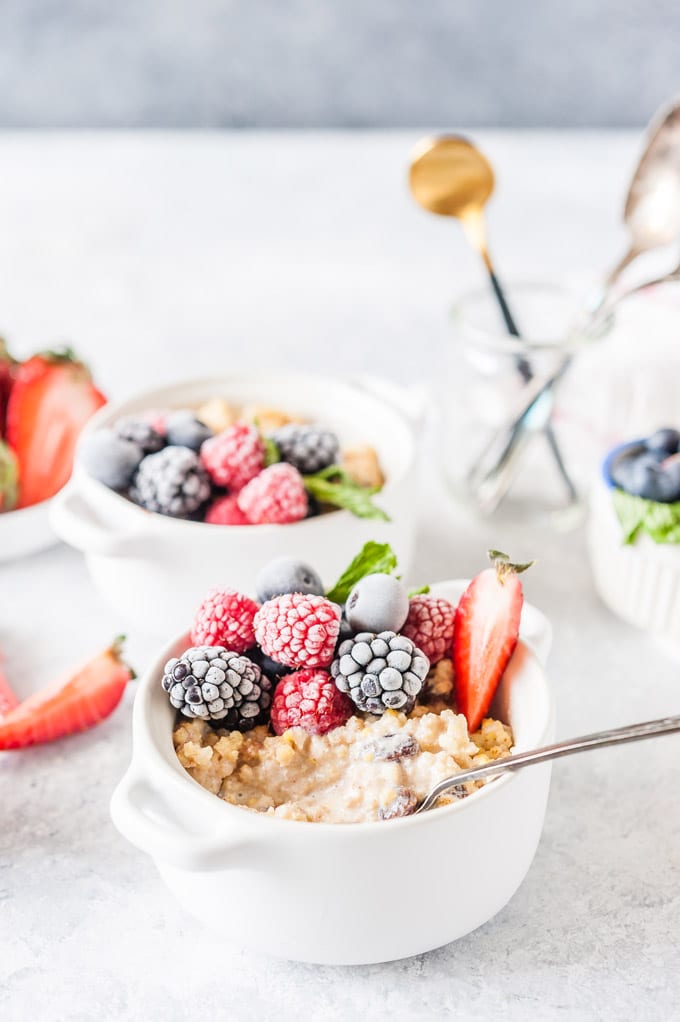 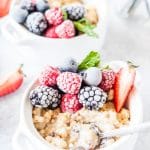 Millet Porridge tastes a bit similar to rice porridge (or rice pudding). You can taste each individual grain just like with rice but each sphere is also soft. In this particular recipe millet has a bite to it. If you prefer smoother and softer texture, then add 1-2 extra minutes to cooking time.