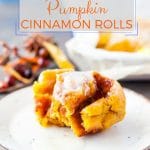 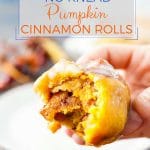 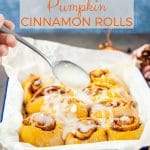 These Instant Pot No Knead Pumpkin Cinnamon Rolls are soft and sweet and delicious. With perfect cinnamon gooey centre and a sticky glaze. Perfect with a cup of coffee for the indulgent Sunday brunch or as an afternoon pick-me-up snack. 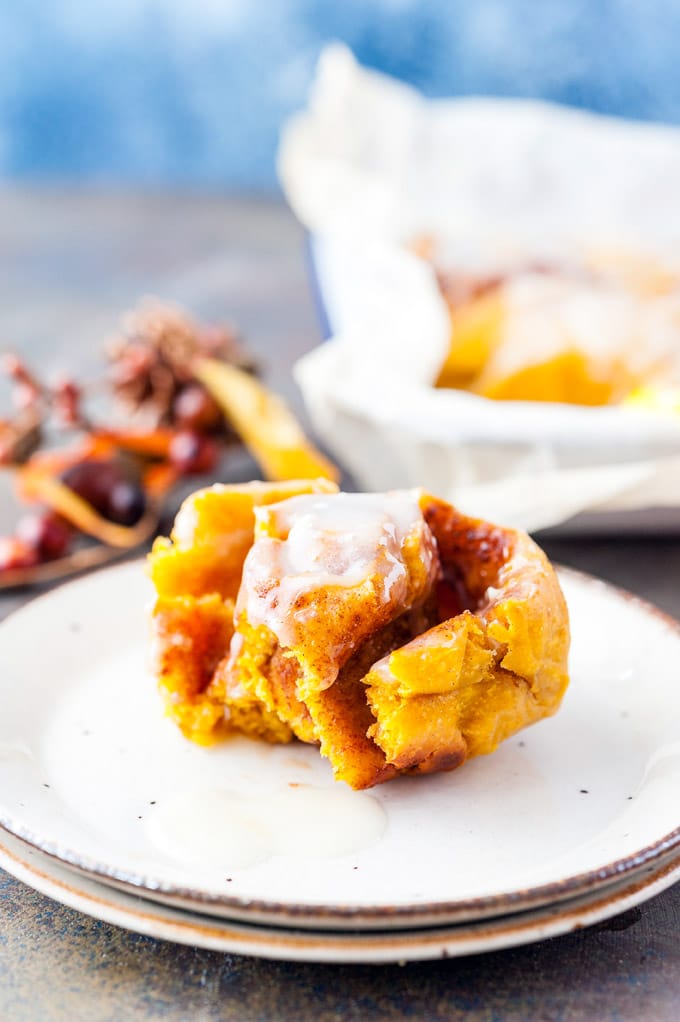 What is your favourite cooking smell? It’s a simple question. One that I usually answer decisively but by the end of the sentence my resolve starts to waver.

My favourite cooking smell is onions frying in a golden pool of melting and foaming butter. I imagine the sound as the tiny cream-coloured cubes of onion hit the hot skillet. In my minds eye, I see the bubbles forming around the edges. I feel the heat of the pan.

Then my mind starts to wonder. The pictures behind my eyes dissolve and see myself opening the oven door and the  yeasty aroma of fresh baked bread envelops me.

I blink and I hear the sharp grinding sound as the air gets permeated with the floral and pungent and energizing smell of coffee.

I don’t have time to stop or to take a fresh breath as one smell after another engulfs me and brings memories: perfectly roasted chicken with its crackling skin, stark contrast of white and orange in a frying egg, the warmth of just-picked tomato.

What is your favourite cooking smell? 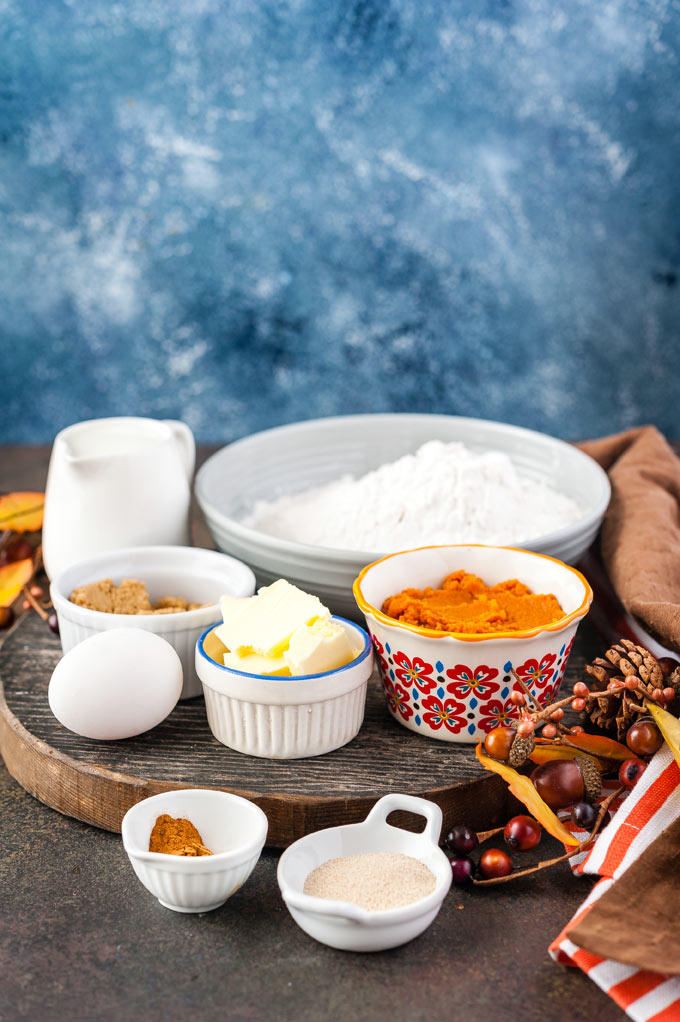 Am I allowed a silly joke here? I am on a roll! I created an Instant Pot No Knead Pumpkin Cinnamon Rolls recipe.

Try my other Instant Pot No Knead Rolls

Cinnamon is one of the spices that I absolutely adore. As most of my cooking, it goes back to my childhood.

My mom rarely used spices: salt, very rarely pepper, Vegeta seasoning (I just recently bought it at Costco and use it often now), vanillin sugar (it was very popular in Soviet Union since we didn’t have vanilla extracts), and, of course, cinnamon, lots of cinnamon.

So, even though I’ve never had Cinnamon Rolls when I was little, the flavour and the smell is so familiar!

These Instant Pot No Knead Pumpkin Cinnamon Rolls are soft and sweet and delicious. With perfect cinnamon gooey centre and a sticky glaze. Perfect with a cup of coffee for the indulgent Sunday brunch or as an afternoon pick-me-up snack. 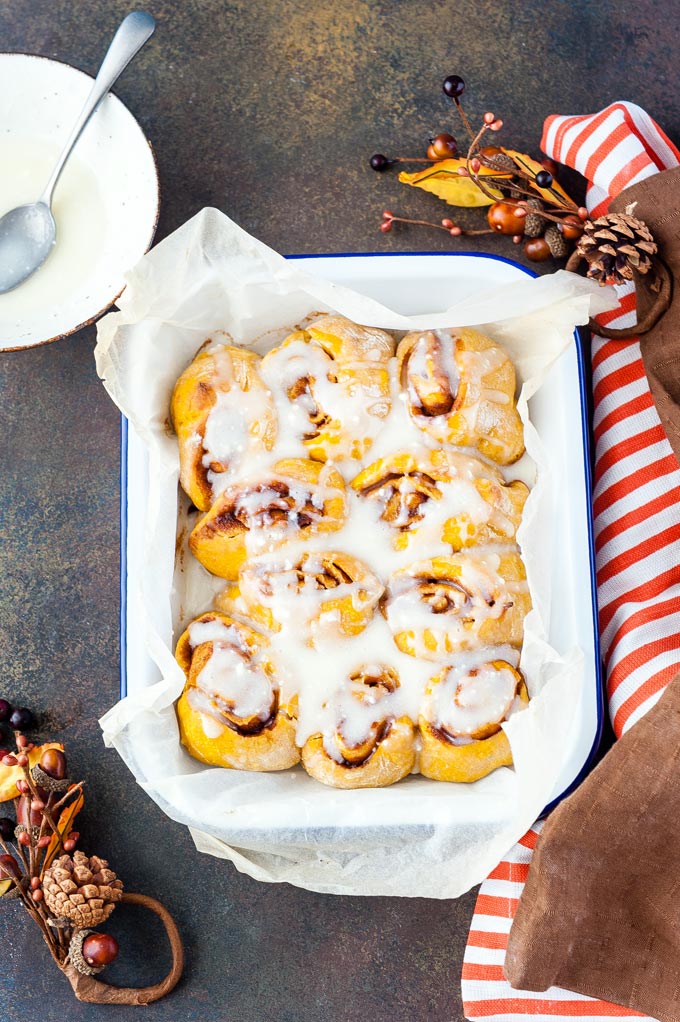 Two words: easy and fast! You need a model of Instant Pot that has a yogurt function. Using a yogurt function, means that it’s just an ideal warm temperature for the dough to rise and it rises fast, in just one hour.

Mixing dough in the Electric Pressure Cooker also means that you don’t have to use separate pots to heat up the milk and melt the butter, everything is done in the same pot, making the dough a one-bowl recipe. 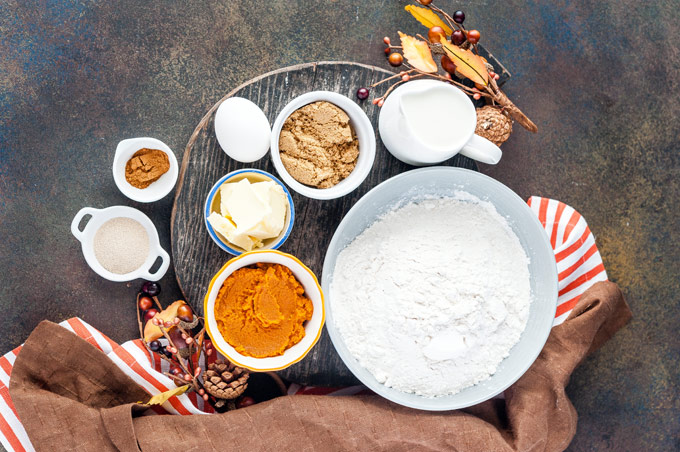 What if you don’t have a yogurt function on your electric pressure cooker?

If your Instant Pot doesn’t have a yogurt function, it means that you would need to make the dough an old-fashion way and let it rise on the counter.

I know some put the dough in the microwave, some in the oven. I prefer to let my dough rise in a bowl in a sink full of hot water.

Most websites will say that 1 cup of flour weighs 120g. I do not know how that can be true! I have been systematically weighing my flour for about six months now. 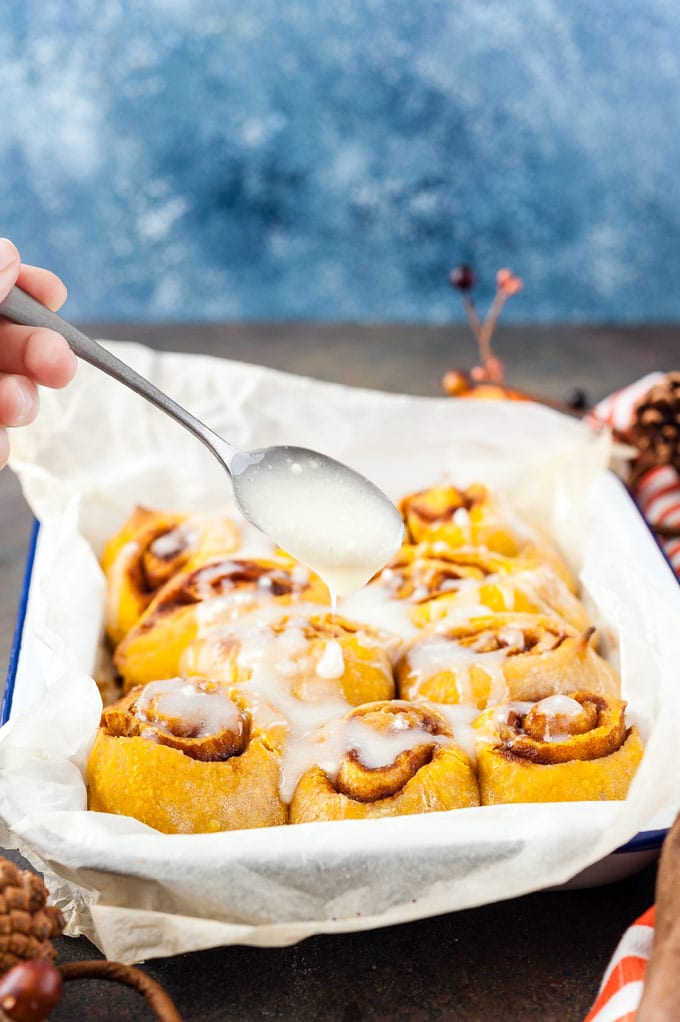 Many people complain that my bread recipes result in the dough that is too sticky. Here’s the thing: sticky dough is not bad!!!

I have made these Pumpkin Cinnamon Rolls with 2.5 cups of flour and with 3 cups of flour. Personally, I prefer 2.5 cups but in this recipe I will use 3 cups so that people don’t complain (or at least complain less).

I, however, urge you to try and use less than 3 cups of flour. It will make the dough more airy even if it’s a bit more difficult to work with. Just remember about the weight (in the point above).

Can you bake No Knead Pumpkin Cinnamon Rolls in Instant Pot?

Well… Yes, you can! I have done it! I actually baked these Instant Pot No Knead Pumpkin Cinnamon Rolls in my electric pressure cooker. Yes, baked, not steamed!

I still prefer the texture of the real oven-baked rolls but if you do not have an access to an oven, then you can bake these cinnamon rolls in your Instant Pot.

Here’s the trick: you need a ceramic insert to do the baking, you line it with parchment paper and bake for 1 hour on low pressure. No water. It will not pressurize and it will bake. 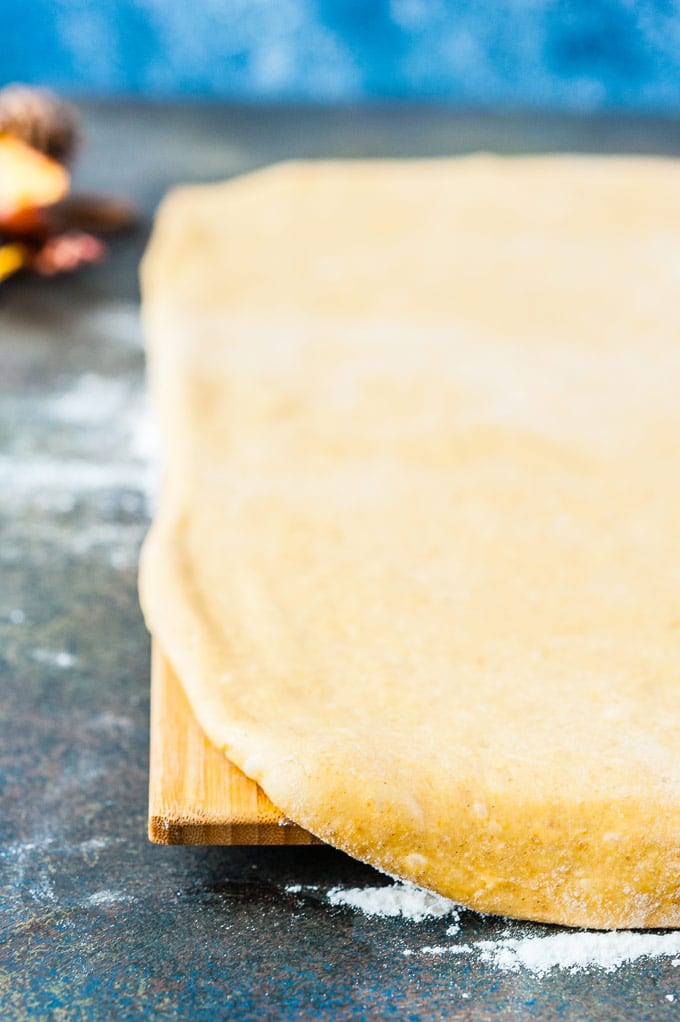 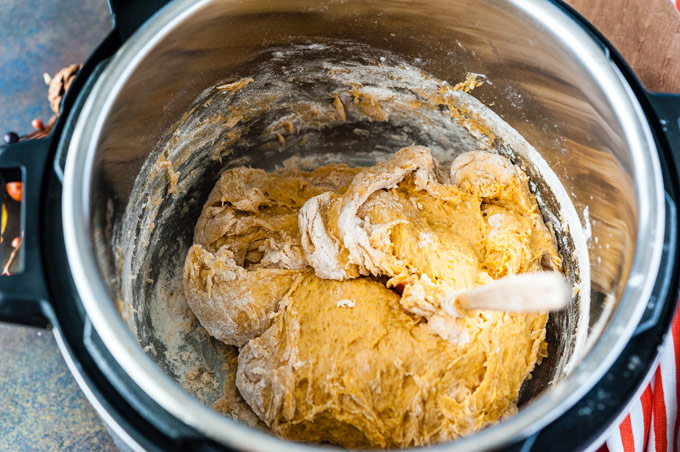 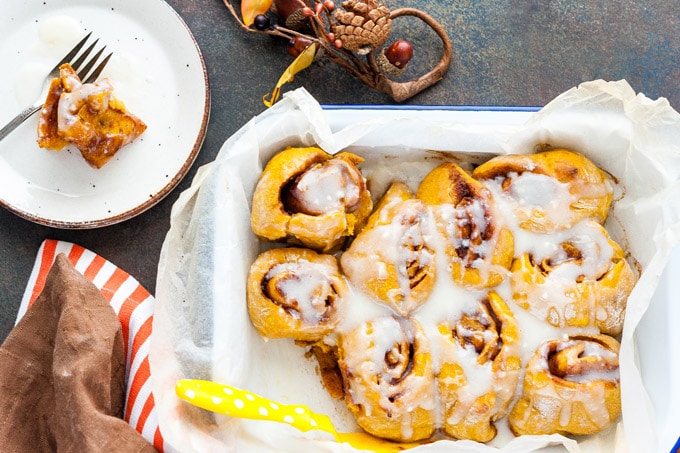 These Pumpkin Cinnamon Rolls are by no means healthy but you can do a few things to make them just a tiny bit healthier. The changes will result in different taste and texture though. 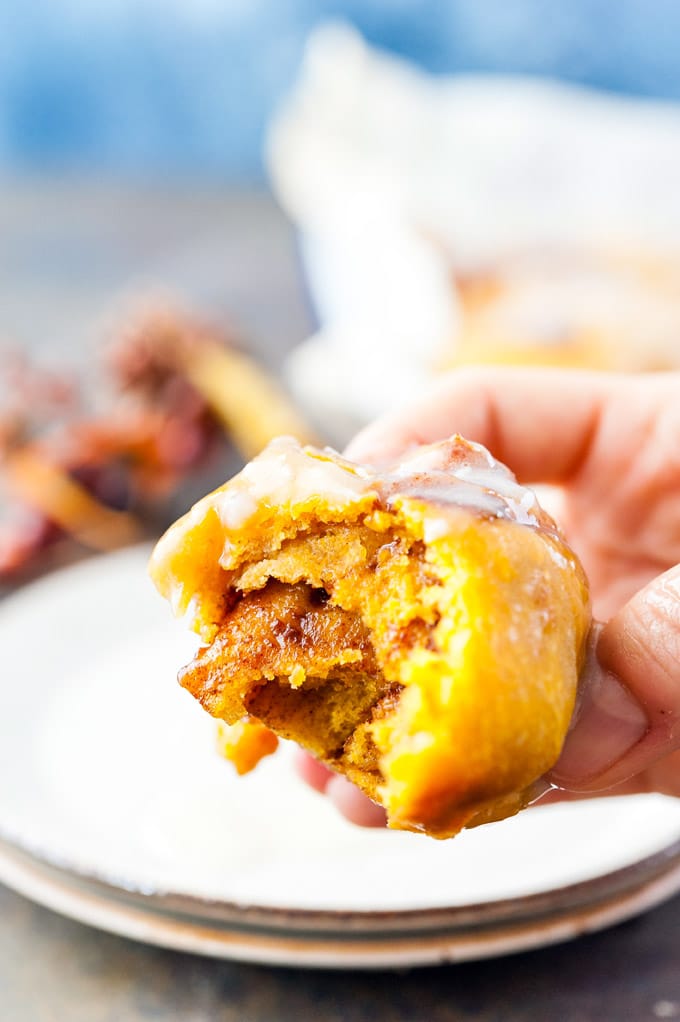 This is NOT a recipe for beginners! Making dough (any kind of yeasty dough) requires finesse and persistence. It took me dozens and dozens of tries to learn how to make dough many years ago.

Although, I find that making dough, including dough for Instant Pot No Knead Pumpkin Cinnamon Rolls, is easy, it may not work for you the first time you try it.

I very highly recommend reading all my points about making dough in Instant Pot in my TWO articles: 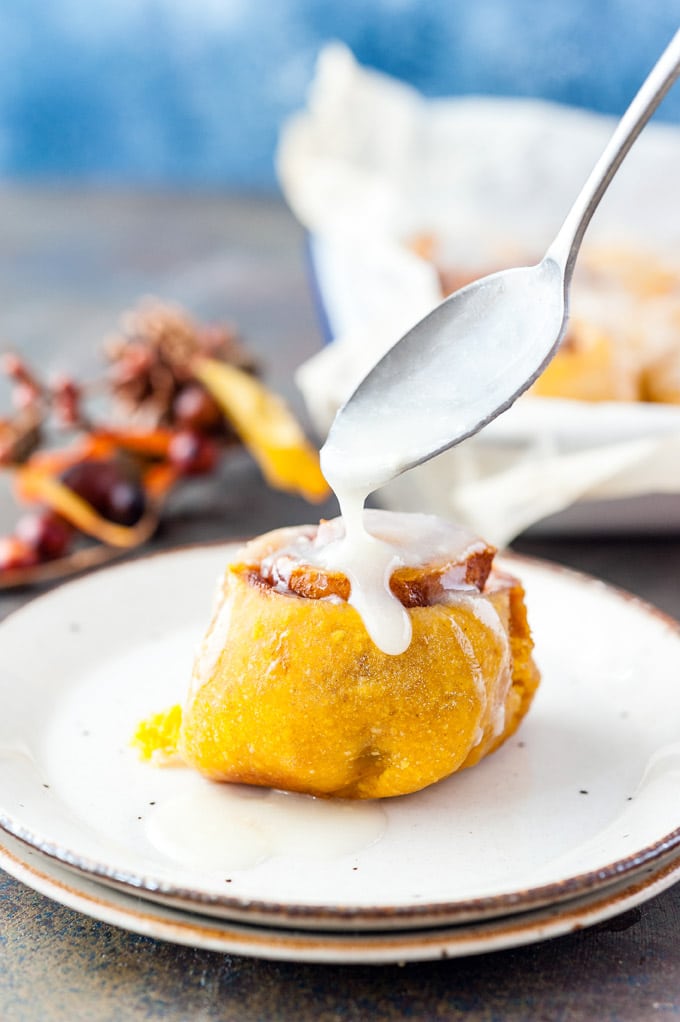 Don’t forget to watch the video to see how these Instant Pot No Knead Pumpkin Cinnamon Rolls are made. 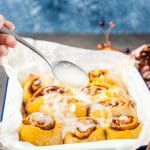 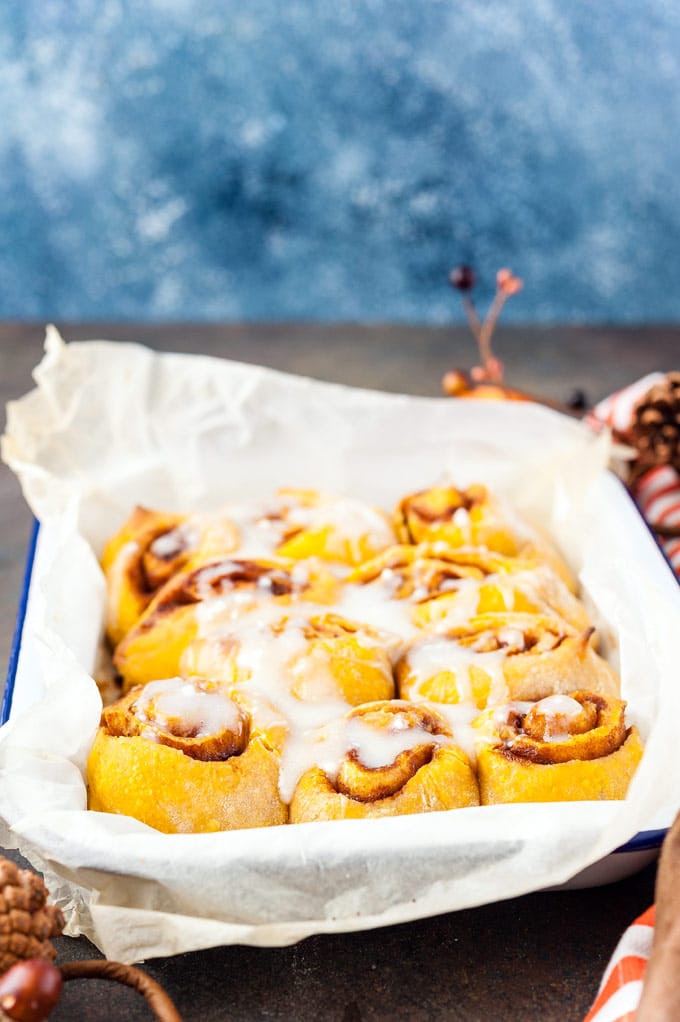