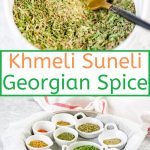 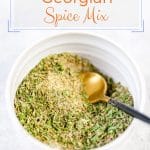 Khmeli Suneli is a wonderful and warming Georgian Spice Mix. It is great to flavour stews, soups, meats, chicken, and even rice or vegetables. Mix a big batch of your own and add to your favourite recipes. No additives or preservatives. 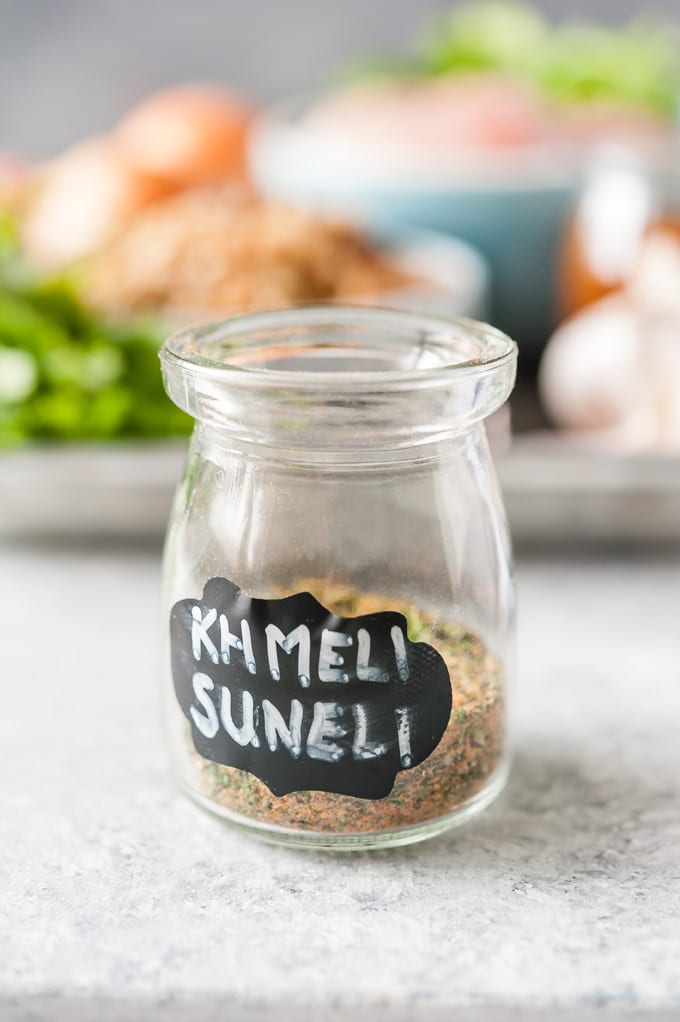 My mom rarely cooks with spices. Salt and on rare occasion pepper were some of the main seasonings that she uses in her cooking. That, and also Vegeta seasoning mix which I always associate with home cooking and very often add to my soups.

Growing up, however, most recipes were just simply seasoned with salt and lots of fresh herbs. All other spices were something unfamiliar and I don’t even remember if I knew that they existed. Except for one: Khmeli Suneli.

Russian cuisine is very strongly influenced by Georgian cooking. Georgia used to be part of USSR and its exotic flavours were brought into Russian kitchens and restaurants. Even now, most Russian restaurants in Toronto have dishes on their menu from Georgian and Armenian cuisine.

Khmeli Suneli is one of the most popular Georgian spice mixes. It might also be popular in Armenia and other countries in Caucasus region but I am not an expert.

Khmeli Suneli is so recognizable that whenever I cook with it, my mom can recognize it just by taking a bite of food. It is almost like a Georgian version of curry powder (without turmeric or cumin) and indeed it can be used as such.

So, after doing some research and checking a few recipes on Russian and American websites, I decided to create my own Khmeli Suneli recipe. It is definitely not authentic but it is delicious and it uses the spices and ingredients that I like. For example, I omitted dried basil and dried mint as some recipes suggested as I am not a fan.

Making your own also means that you get to use fresh ingredients and no additives or preservatives! It is also much cheaper if you make your own than if you buy it online if you have no access to a Russian grocery store.

And for those who don’t really fancy making their own but would still like to try this wonderful and warming Georgian Spice Mix, you can buy Khmeli Suneli on amazon. 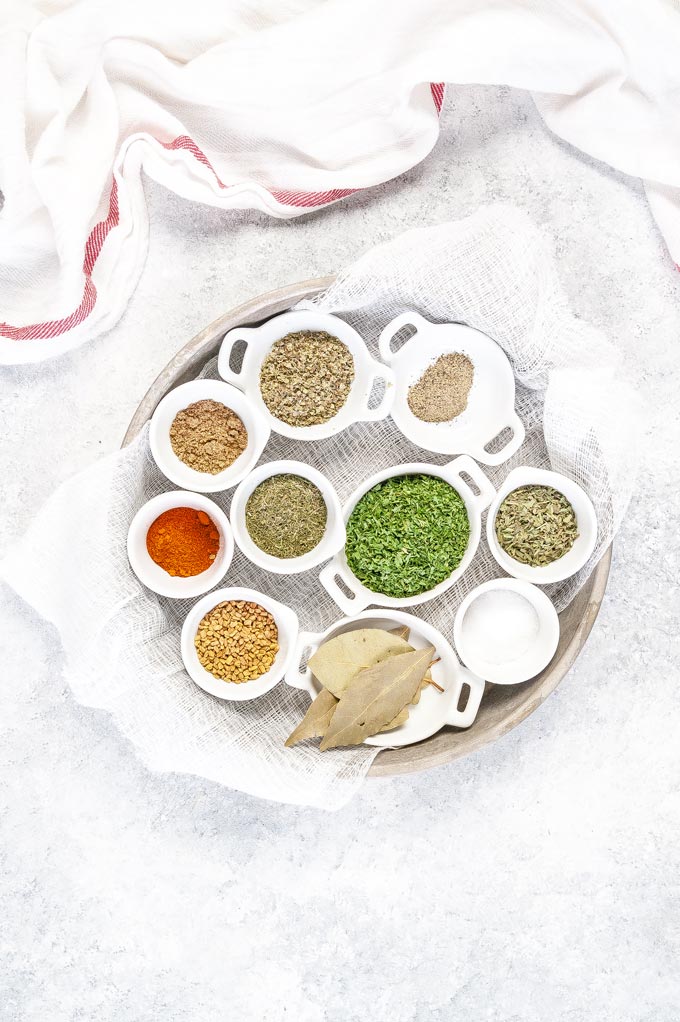 Most dried herbs and spices used in Khmeli Suneli Recipe are actually quite common except for fenugreek that is one of the main ingredients.

There are many variations online for Khmeli Suneli Recipe. Some call for celery, dried mint, and dried basil. Some omit chili powder, dried parsley, and dried tarragon. It seems that fenugreek, bay leaves, and coriander are present in all recipes that I saw.

Making this Georgian Spice Mix is actually really easy and takes only a few minutes. 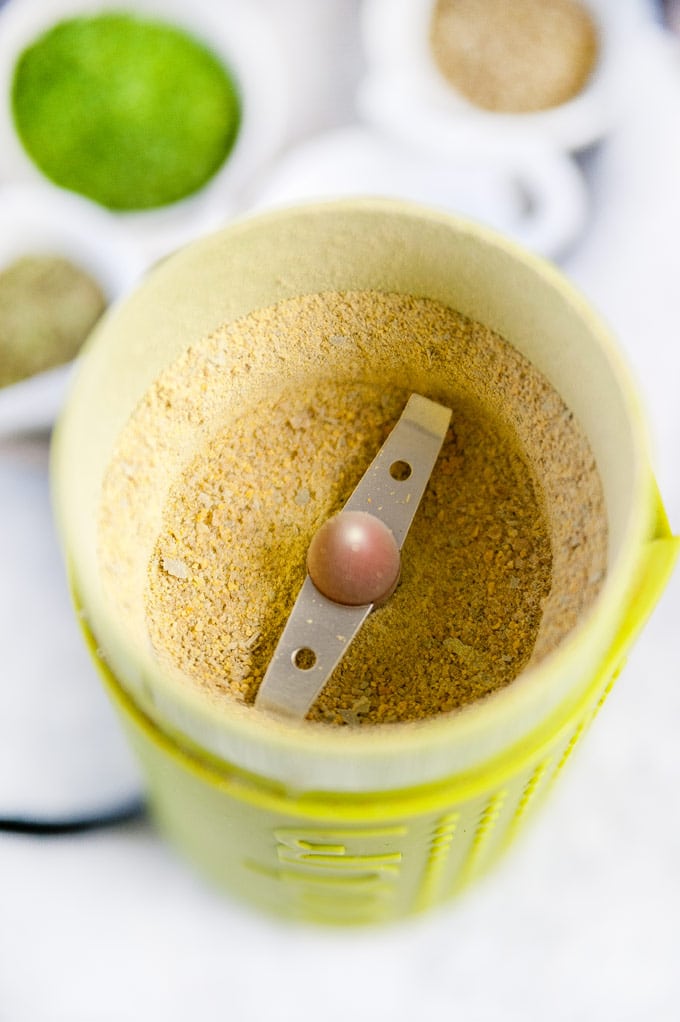 Do not try to use mortar and pestle to grind the fenugreek seeds into a powder. I tried it at first and after 5 minutes I was only able to barely crush one of the seeds. They are extremely hard to crush with a pestle. Use your coffee grinder or spice grinder instead.

Also, once everything is measured and added together, make sure that all the ingredients are mixed very thoroughly so that every tablespoon has a little bit of everything. If possible, store in a container that can be shaken easily before using.

Khmeli Suneli is almost like a Georgian version of a curry spice, so you could use it in a similar way. It is generally used to flavour roasted chicken, stewed meats, meaty vegetables such as eggplants or mushrooms. It is often added to soups and sauces.

Try adding the spice mix to such recipes as chilis or tacos. The flavour will be different from the traditional Mexican tastes but not less delicious. Add Khmeli Suneli to rice dishes or roast lamb.

It’s an all-purpose spice mix that will be a great addition to your cooking repertoire! It has a savoury and warming flavour that will make your taste buds sing!

Like with any ground herb or spice, the ingredients will loose a little bit of their flavour and punch the longer they are on the shelf. So, for the most flavourful and potent mixture, try to use within 3 months. But in reality, Khmeli Suneli will last for longer, you just might need to add a bit more to flavour your dishes if the mixture was done 6 or more months ago.

You can use this fun spices organizing set to store and label your jars of spices. 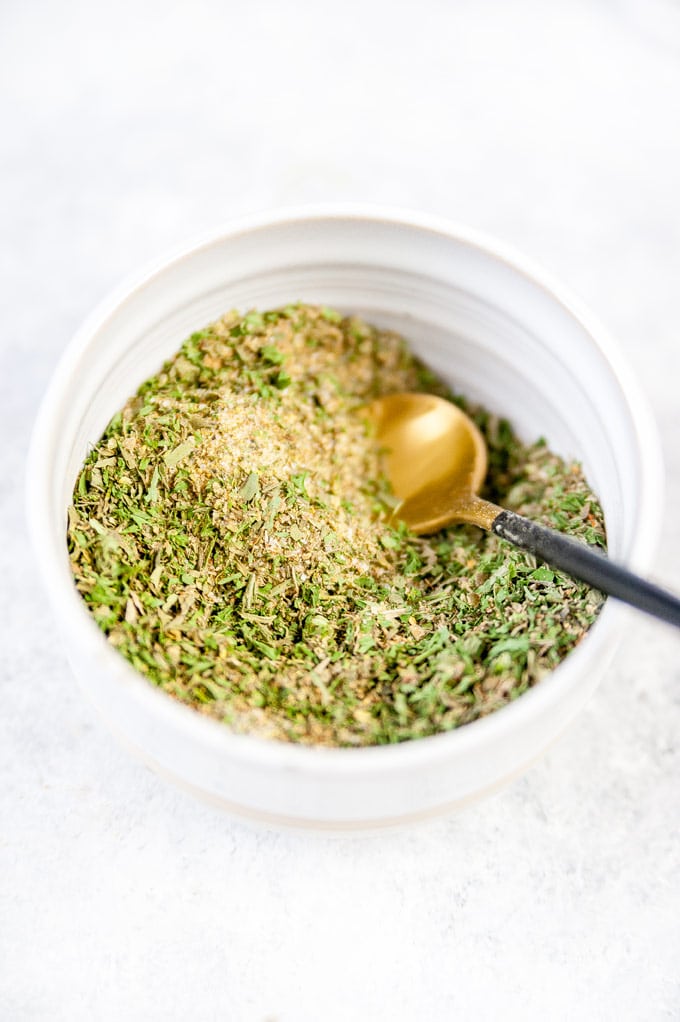 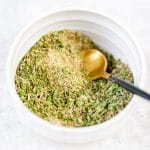 You can double or triple the recipe if desired.