These Pecan and Boursin stuffed Dates are the easiest and quickest appetizer. They are easy to assemble and even easier to eat and they go perfectly with a glass of bubbly during holiday entertaining. 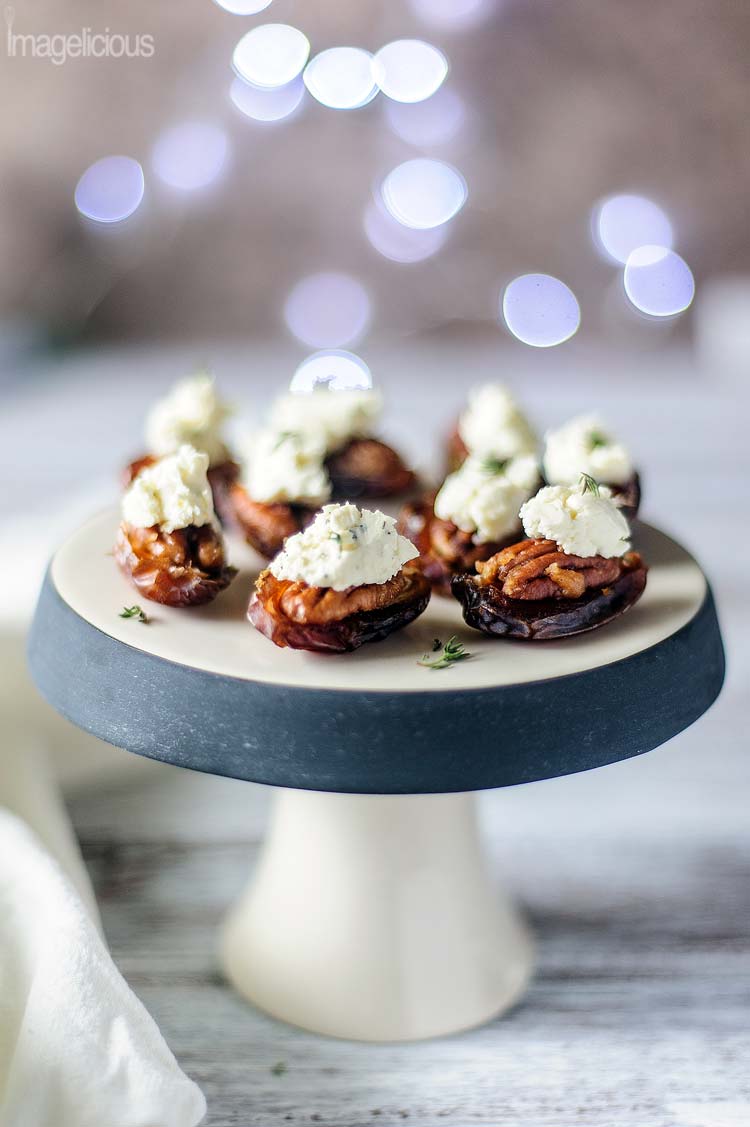 Almost two decades living in Canada and Christmas is still not my holiday. It’s New Year that’s the most magical time for me.

Christmas is confusing. Is it December 24th that we are supposed to celebrate or 25th? When does Santa Clause bring the presents – evening, midnight, or morning? When are you supposed to open the gifts?

On December 31st you sit down to a very late dinner with your family and friends. Russian Santa Clause – Grandfather Frost – comes a bit before midnight and leaves a big sack full of presents, usually outside the front door entrance.

At midnight everyone makes a wish, drinks a sip of Champagne, and then opens presents. The dinner and celebration then continue way into the early hours of the day.

Russians don’t celebrate Christmas like Americans do. First, Russian Orthodox Christmas is in January. And second – it’s New Year that was ingrained into everyone’s hearts by years of communist doctrine with adult fairy tale movies and New Year TV specials.

Back in Soviet Union religion was prohibited, the only faith people were supposed to have was in the Communist Party. But there needed to be something to look forward to and believe in, and so people believed in miracles.

New Year was always a magical time. A time when all the dreams could come true. A time when anything was possible. It’s especially prominent in traditional New Year’s Eve movies – adult love stories so improbable that they could only happen during one night of the year– December 31st.

I still watch the same movie (The Irony of fate) every New Year’s Eve – a three hour long story of two people meeting by chance, breaking off their respective relationships, and betting that they’ll live happily ever after only after spending one night, New Year’s night, together.

After all, there’s Russian superstition that says: “The way you spend New Year’s night is the way you will spend the rest of the year.”

I silently wish for the health and happiness for my family. I can’t wish it out loud as then it won’t happen. Russians are a very superstitious bunch.

I still remember being five years old. I was spending New Year with my grandparents while my parents, five years younger than I am now, were with their friends. The doorbell rang late in the evening; I ran to the entrance and waited patiently for my grandparents to unlock the door.

I already suspected that Grandfather Frost wasn’t real, but there it was – a big sack of presents and both of my grandparents, still young and barely in their 50s, standing next to me – proof that he existed. And just like that, I believed in magic again.

Years later I asked my grandparents about it. They said the neighbour rang the doorbell and left the gifts outside. They made magic happen.

Every December 31st I still hope to recapture the childhood feeling of magic. Every New Year’s Eve I still miss my grandparents. 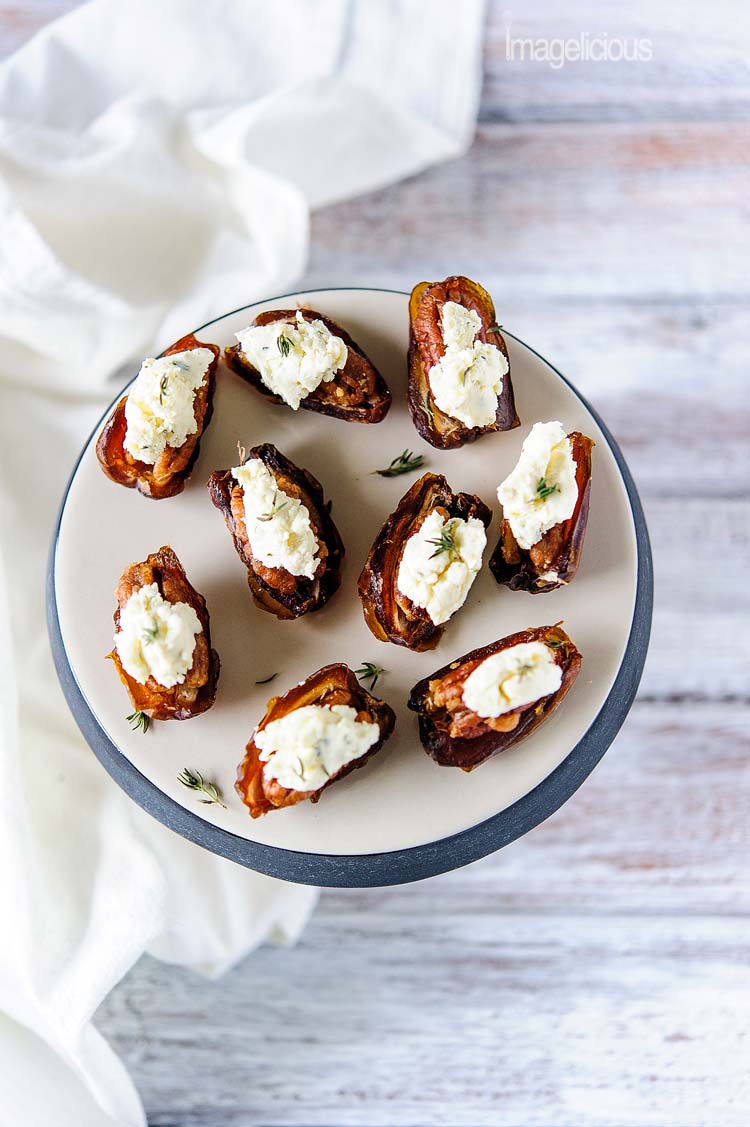 This Pecan and Boursin stuffed Dates recipe isn’t Russian. I feel overwhelmed by the flashbacks on the cusp of New Year that I rarely cook my grandmother’s food – too many bitter-sweet memories.

The table tonight will be a mix of my Russian-Canadian upbringing. Traditional Russian Olivier potato salad will mingle with this Pecan and Boursin stuffed Dates appetizer; platters of smoked fish, deli meat, and cheese will be mixed with plates of olives and puff pastry canapés. There will be wine and champagne and more food than we’d need for this very late midnight dinner.

I made these Pecan and Boursin stuffed Dates many times before. I used goat cheese, blue cheese, and finally this year I tried Boursin cheese. Surprisingly, I loved the Boursin version the best.

Slightly garlicky cheese compliments dates and cuts through their sticky sweetness. Spicy caramelized pecans provide a much needed textural contrast to the smooth cheese. Herbs in Boursin and thyme add a savoury note. These little and simple canapés are actually really flavourful and are a perfect accompaniment to a glass of bubbly. 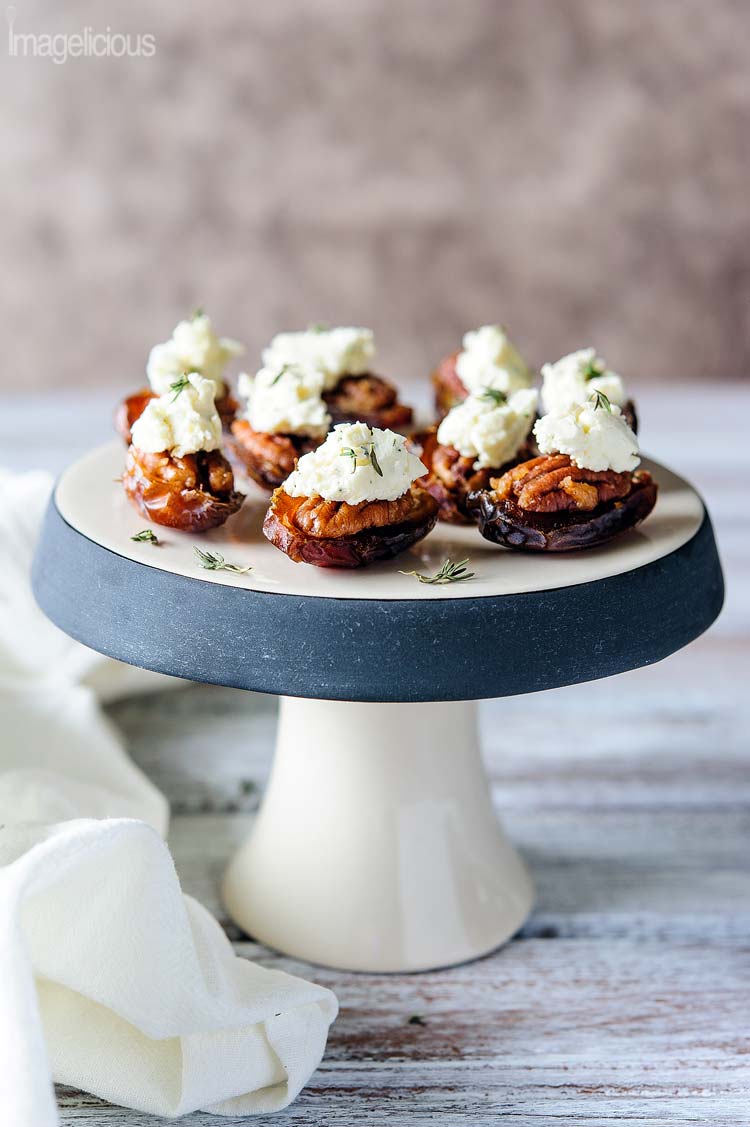 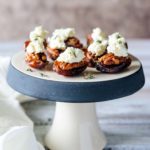 These Pecan and Boursin stuffed Dates are the easiest and quickest appetizer. They are easy to assemble and even easier to eat and they go perfectly with a glass of bubbly during holiday entertaining | Imagelicious
Course Appetizer
Cuisine American
Keyword appetizer
Prep Time 10 minutes
Total Time 10 minutes
Servings 10 servings
Calories 92.44kcal
Author Julia