Last weekend I summoned a bunny. Well, I did not really summon it. I have a chalkboard in my kitchen where I write dinner menus and various seasonal notes. So, I decided it was time to put something for Easter and I drew a bunny. An hour or so later, while I was cleaning carrots for the Carrot Cake, I looked out the window and noticed a big bunny sitting in our backyard. Contrary to popular belief, carrots are actually really bad for rabbits, so we tried to feed it green beans and cucumber, which our guess ignored. Few hours later my brother and sister-in-law came over for team and they happened to have an apple with them. Bunny liked the apple and we got to enjoy all the bunny cuteness for a few hours.

On Thursday bunny came to visit us again and I decided that I should buy apples for bunny. And with my love for Costco I, obviously, ended up with six pounds of apples. So, this morning I was trying to decide what to make with the apples and this recipe came to mind.

It’s a mix between regular pancakes and Russian сырники. Cottage cheese (творог) is very popular in Russian cuisine. It’s not the grainy cottage cheese that is found in tubs in North American supermarkets. It’s smooth and relatively dry and creamy and just, oh, so delicious. I think Ricotta is closer to Russian cottage cheese, than Cottage cheese from the tubs. Russian cottage cheese pancakes are very dense and the texture of dough resembles gnocchi, the cakes can actually be shaped by hand. This recipe is not as dense as the Russian version, but much denser than traditional American pancakes. As a result, they have to be cooked longer in order to be fully cooked. Or, alternatively, they can be shaped into thinner patties.

PS. Yes, bunny came over again this morning. I gave him apples. He’s still there. His name is Benny. Benny the Bunny. 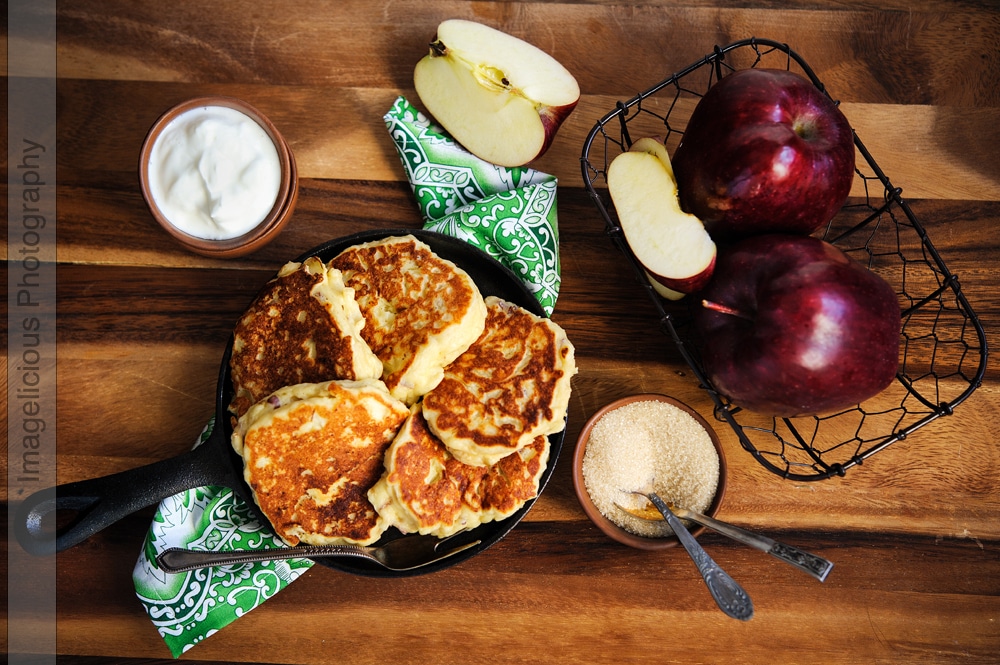