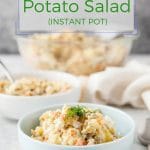 This Russian Potato Salad is one of the most popular Russian dishes. Made with creamy potatoes and eggs, mixed with crunchy pickles, and speckled with peas and carrots. Instant Pot makes cooking it much easier and faster. 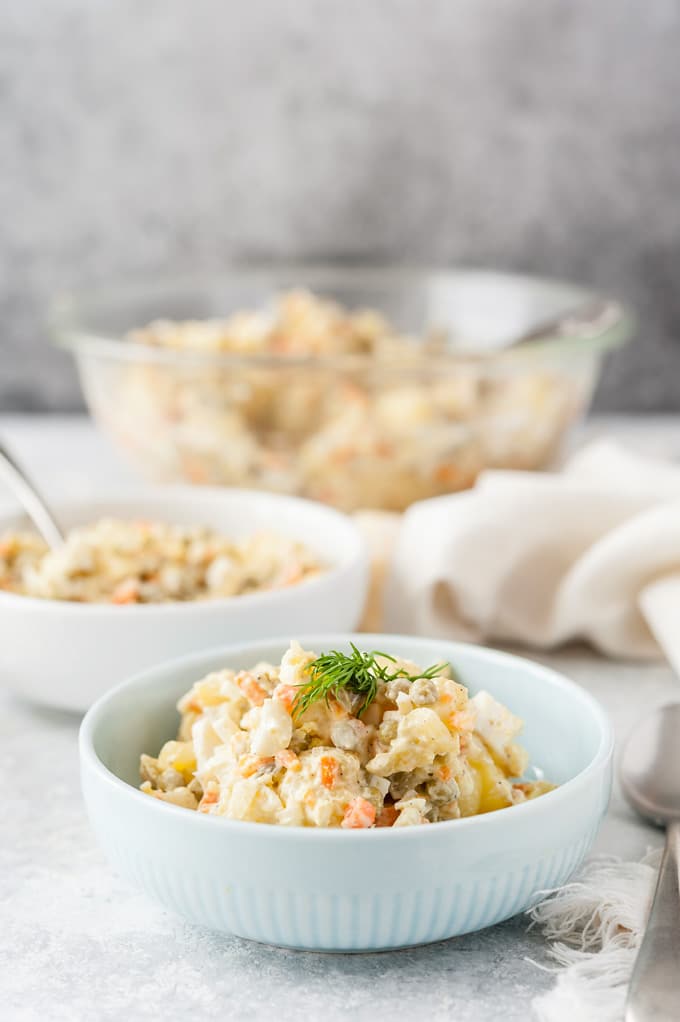 I often get asked to describe Russian food. This question usually gives me pause.

For me, Russian food can be split into three categories: before WWI, during Soviet Union era, and post-Soviet Union. I have read with hunger and delight Gogol’s passages in Dead Souls on food when I was younger, yearning for the time long gone and for the culinary pleasures that I would never experience.

I poured over cooking books on history and recipes of the tzarian era. Those books were peppered with sentiment and words I could not understand.

Pages upon pages made me feel awkward, listing ingredients and techniques that I could not even pronounce. This is not the Russian food that I can comment on.

Having left Russia during the mid-90s and having not been back since 2000, I cannot comment with any expertise on the current state of Russian food culture either. What I can describe though, is the food I grew up with: Soviet food.

Food not based on regional agriculture or affected by trades and economy but food based on necessity. Food based not on the available ingredients but instead on their absence.

It’s the absence that created one of the most popular Russian (well, really Soviet) dishes called Olivier Salad. This Russian Potato Salad originates  in the late 19th century; a French chef, Lucien Olivier, invented it for a restaurant in Moscow. That concoction included roasted grouse, crayfish tails, caviar, capers, and olives along with more common potatoes, cucumbers and eggs.

Decades later, during many hunger-filled years, desperate for some forgotten grandeur of prosperous time, Russian people made substitutions and omissions. They used boiled diced carrots in place of caviar and crayfish, not for flavour or texture, but for visual representation.

Salty and crunchy pickles were added instead of tender and fresh cucumbers, briny olives and now exotic and forgotten capers. Grouse was first changed to boiled chicken, then to bologna and then skipped altogether. Boiled potatoes and eggs were all that was left from the original salad.

Deficit is the adapted translation of the word for describing taste that I grew up with. It was an adjective that came to describe many ingredients.

Butter went from rich and creamy to salty and icy to deficit. Ice cream – not sweet and fruity, but deficit. Cheese – no descriptives needed, just deficit.

But even in those times of austerity, my Russian food memories have tables overflowing with platters of salads laden with mayo, smoked fish (rare, reserved for special occasions), and canned meats. 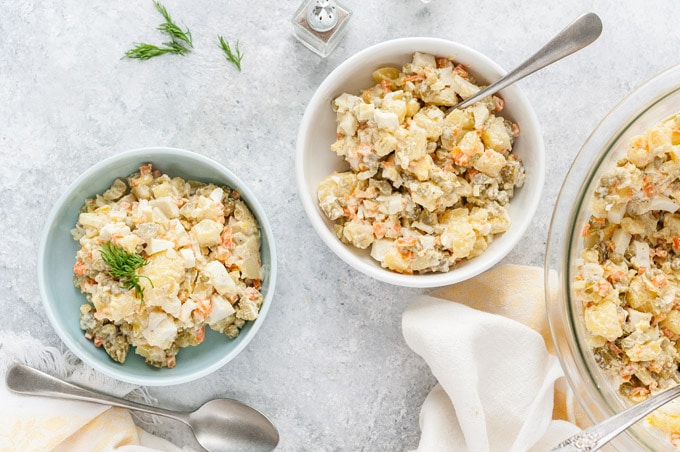 For me, no New Year’s Eve celebration is complete without a serving or two of Russian Potato Salad. There are dozens of variations of the recipe but my grandma made my favourite. Her secret was in dicing all the ingredients really finely, this way every forkful had a bite of everything.

Out of all the Russian recipes, this is my husband’s favourite. I tried making Russian Potato Salad a few times but it took a long time to make and I preferred buying it from a Russian grocery store.

However, I recently discovered a way of cooking the vegetables and the eggs in my Instant Pot, and although pressure cooking doesn’t make this salad super easy, it makes it a little bit easier and a lot more convenient. 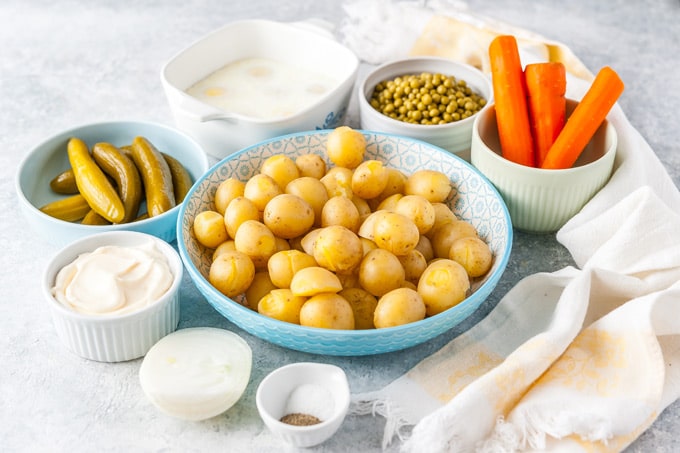 What are the ingredients in Russian Potato Salad (Olivier Salad)

Here are the main ingredients: 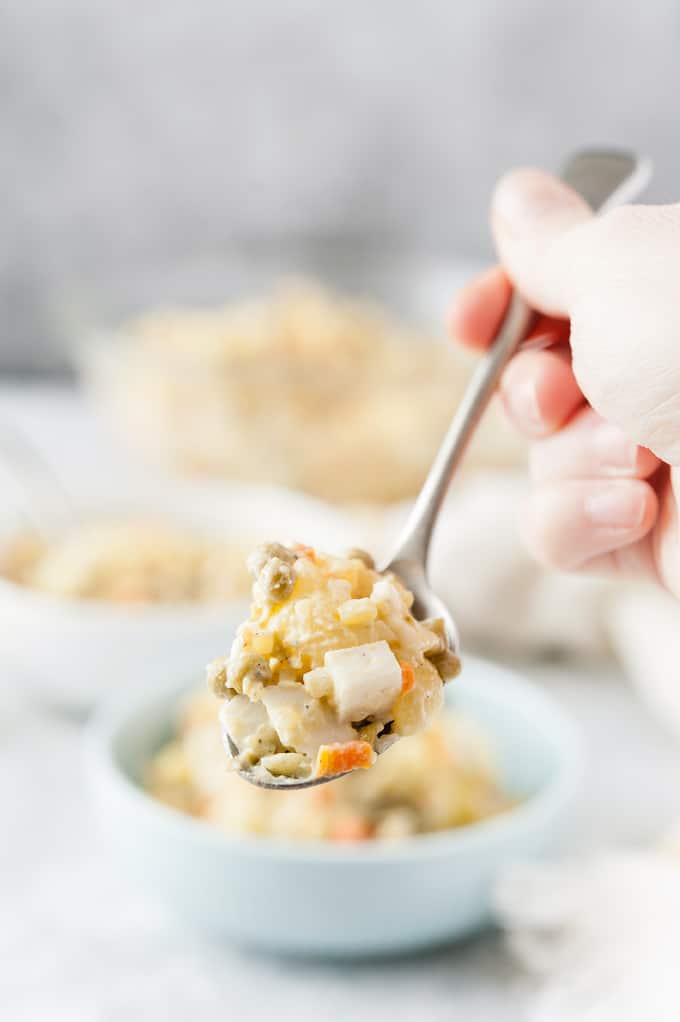 This recipe varies from family to family. In mine, we always had it without any meat. On very rare occasion, my grandma added real canned crab to it.

Many Russians do not even consider this salad to be a salad without chopped bologna. Some add cooked chicken or beef tongue.

I have seen many versions with diced apple, fresh peas, cauliflower instead of potatoes. Some add sour cream or yogurt to mayo. Some add mustard.

For me, all those variations do not work. They are not something I grew up eating, so I am sticking to my original version.

The only ingredient I am not entirely sure about is onion. I add it to my Russian Potato Salad (Olivier Salad) but I do not remember if it was in my grandma’s recipe and unfortunately she’s no longer here so I cannot ask her.

Why use Instant Pot to make Russian Potato Salad

Whenever I made this salad before Instant Pot, I would have three pots going on the stove: potatoes in one, carrots in another, eggs in the third. Cooking all those three ingredients in Instant Pot means that I only get one pot to wash, thus turning it into an Instant Pot Russian Potato Salad.

Also, egg loaf!! I do not know who invented it but it is genius! Instead of cooking eggs in their shells, the eggs are cracked into an oven-proof bowl and cooked in electric pressure cooker into a loaf. Once cooked, there’s no need to do any peeling and chopping an egg loaf is way easier than chopping individual eggs!

I use a small Corningware dish to make egg loaf. You can use any ove-proof dish that would fit into Instant Pot and hold 5 eggs.

How to cut the ingredients for Russian Potato Salad

I strongly (very strongly) urge you to cut everything into small and even dice. You can see in the photo and in the video how small everything is.

For example, I try to dice the onion and carrots into 1/8th or even 1/16th of an inch pieces. In my mind it is essential to the right salad to do so.

I know that many people do not agree and chop everything into half an inch or even bigger pieces but I feel that’s not the best way.

This salad should easily keep in the fridge for about five days. Most likely it could keep for even a week but I have never tried it myself.

TIP: you could prep all the ingredients and keep them in separate airtight containers. Then just mix a small amount a night before you want to eat the salad. This way you can make this one big portion but you don’t have to eat it right away and it’ll be fresher this way. 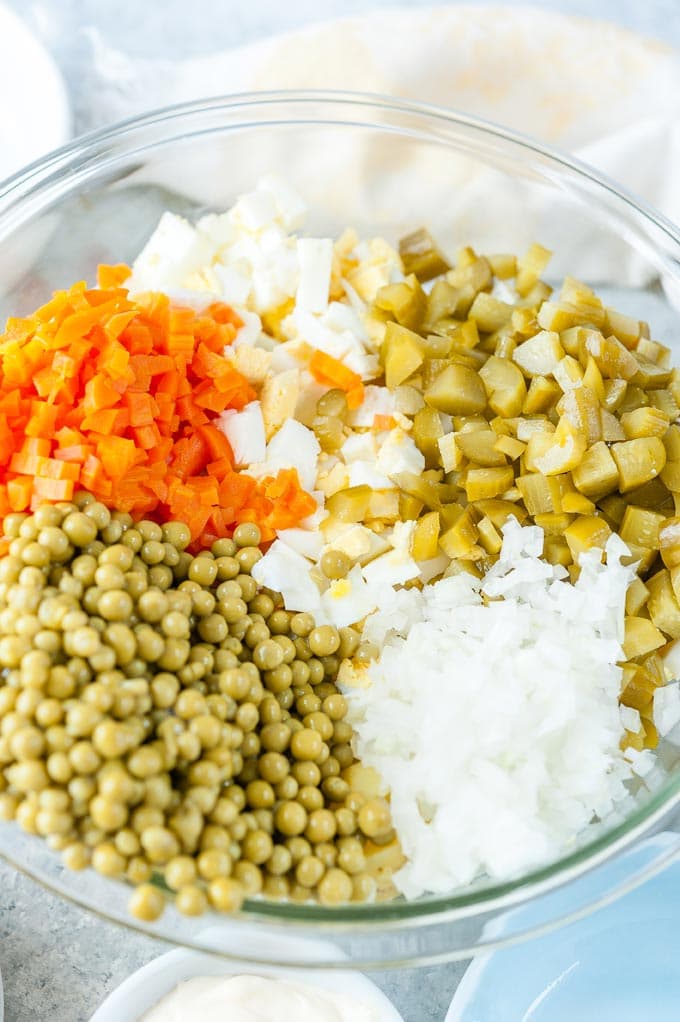 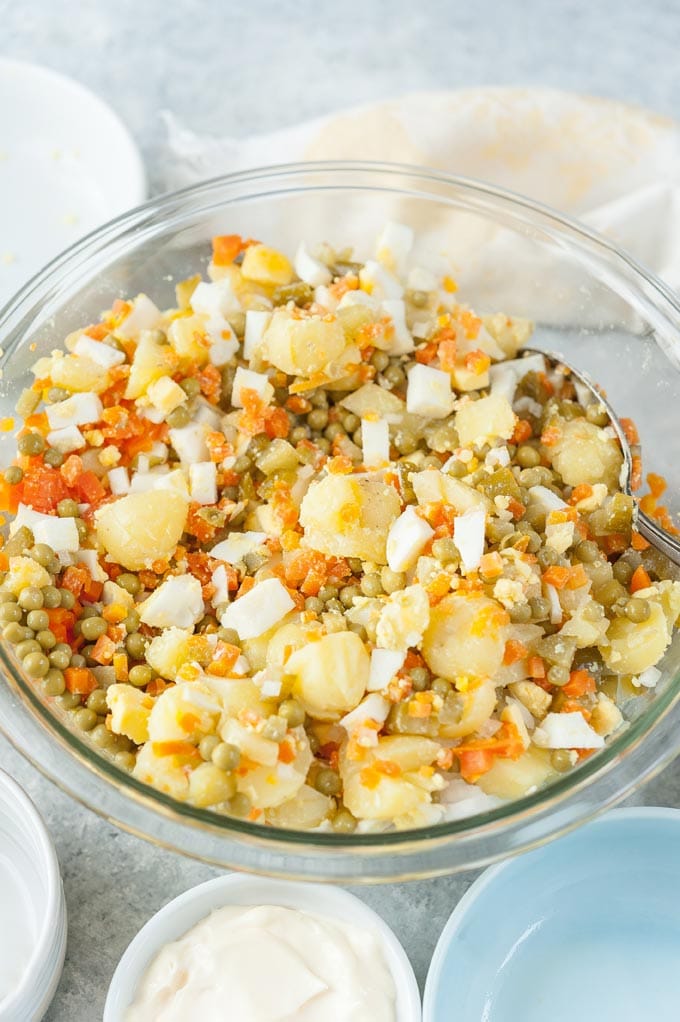 Do you need to chill Russian Potato Salad?

Yes! The flavour improves as the salad rests in the fridge for a few hours or even better if it’s overnight. Mayo permeates all the ingredients and makes the Russian Potato Salad creamy and smooth. You get the crunchy pickles and onions mixed with salty and creamy eggs and potatoes.

You can serve the salad right after making it but it’ll be better if served a few hours later.

If you would like to see more Russian recipes, for example, Baked Milk, then buy my new cookbook, The Ultimate One-Pan Oven Cookbook. It is not a Russian cookbook but it contains quite a few Russian-inspired recipes. It will also make a great gift! 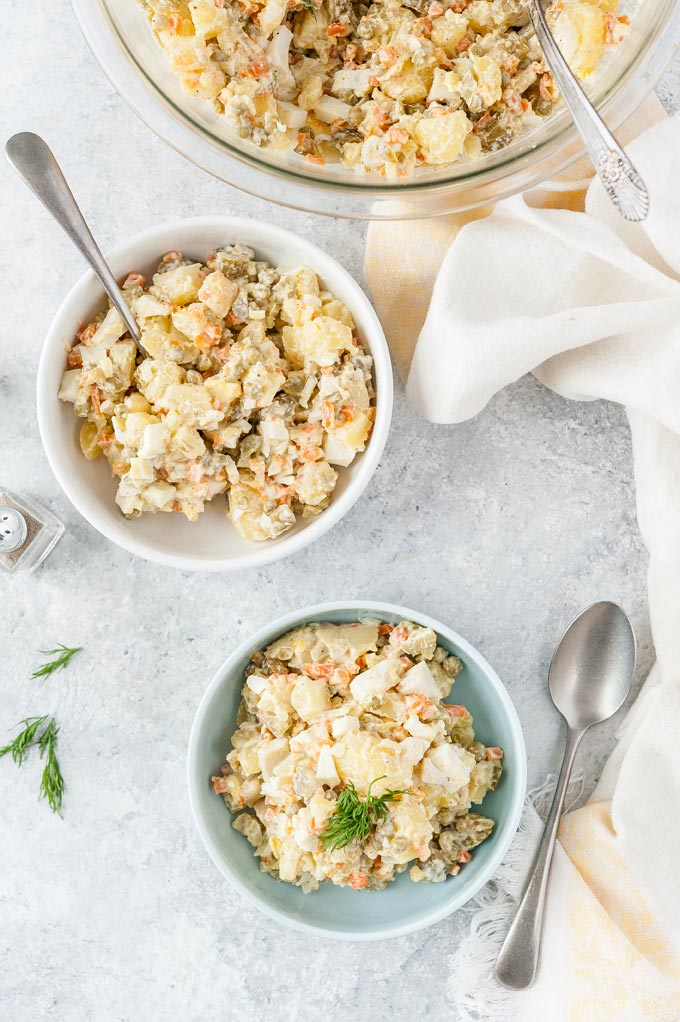 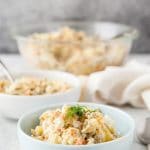 Make sure to watch the video to see how finely everything is chopped and diced as it is important to the flavour of the salad.   This Russian Potato Salad will last in the fridge for up to 5 days.