This is an accidental recipe, which often happens to be the best kind of recipe! I used to be all about planning my food. I’d find some beautiful picture in my favourite cookbook or Pinterest when it became popular, make a list of ingredients, then go to one, two or sometimes even three stores to purchase everything, then slave for hours in the kitchen only to realize that this particular flavour combination may be great, but not to my taste. Well, that was years ago. I was young, inexperienced in the kitchen and, to be honest, scared to experiment.

Then recipe by recipe, meal by meal I shed this “scared cook” identity and began to try out new things. First, I still followed the instructions and made ingredient lists, but stopped obsessing over getting every single item from three different grocery stores. Then I started varying spices, making my own substitutions, tweaking flavours to something that I knew I actually liked. And then, finally, I stopped making lists when going to the stores. Well, that’s obviously not entirely true. I still make lists since I have terrible memory: flour, sugar, eggs, milk, staples like that. When I have people over I always plan everything in advance. But daily meals are a different story now.

I approach my grocery shopping with a cooking show mentality, when you get a box of mystery ingredients and you have to make something delicious out of it. I get to the store and look for items that are on special or interesting or look good and fresh. Sometimes it’s sausages that are on sale and I make delicious bakes just combining all of the veggies I have with sausages, some oil, thyme and baking it until all the flavours meddle together into a comforting and delicious dish; sometimes it’s thin pork chops that are on special which I pound even thinner, dip in egg, panko bread crumbs and pan fry to make delicious crisp schnitzel; other times it’s whole chicken legs which I roast with lemon.

So, this recipe is one of those. Trout wasn’t on sale at Costco, but it looked really good and I had a recipe in mind – Cedar Plank BBQ Trout. Unfortunately, the weather did not want to co-operate, and I had to improvise. I can’t imagine fish without some tang of lemons or limes and spiciness and freshness of dill. But I wanted the fish to be just a little bit more fancy and remembered how many years ago, when I was still following recipes to the letter, I made lamb chops with a really nice persillade/gremolata crust, so I thought why not try it with fish. The result was really delicious: moist flaky trout contrasted really well with crunchy topping full of wonderful spicy dill and refreshing lime. Easy enough meal to prepare on a week night, but elegant enough for a weekend dinner. I served with even more lime to squeeze on top, more dill and fresh tomatoes from my garden. 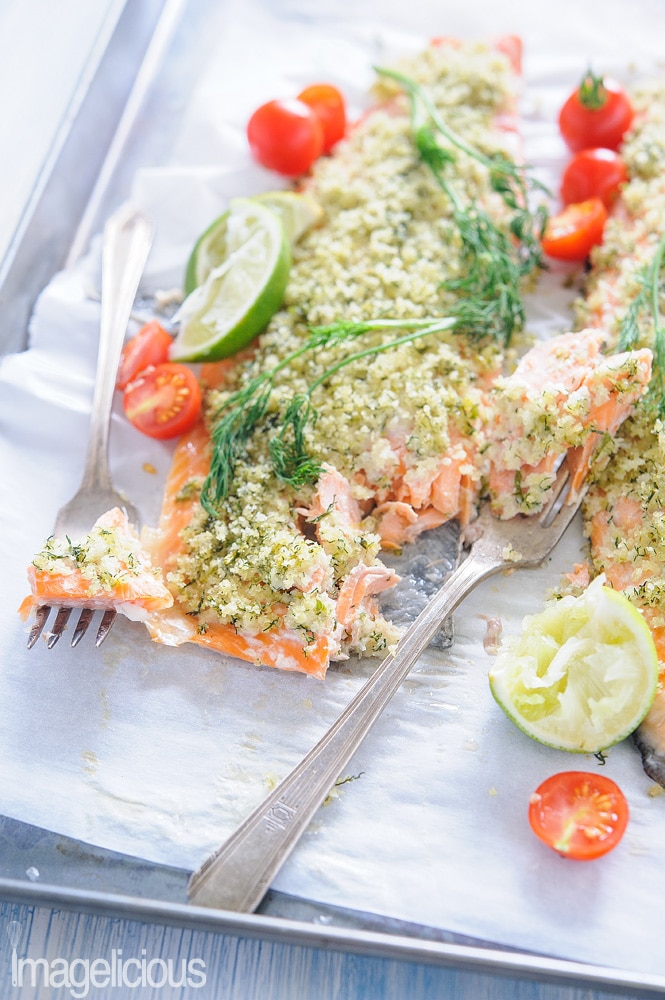 Since the package of trout was from Costco, there was a lot of fish, in fact, it had 5 fillets. So, the recipe can be easily halved. 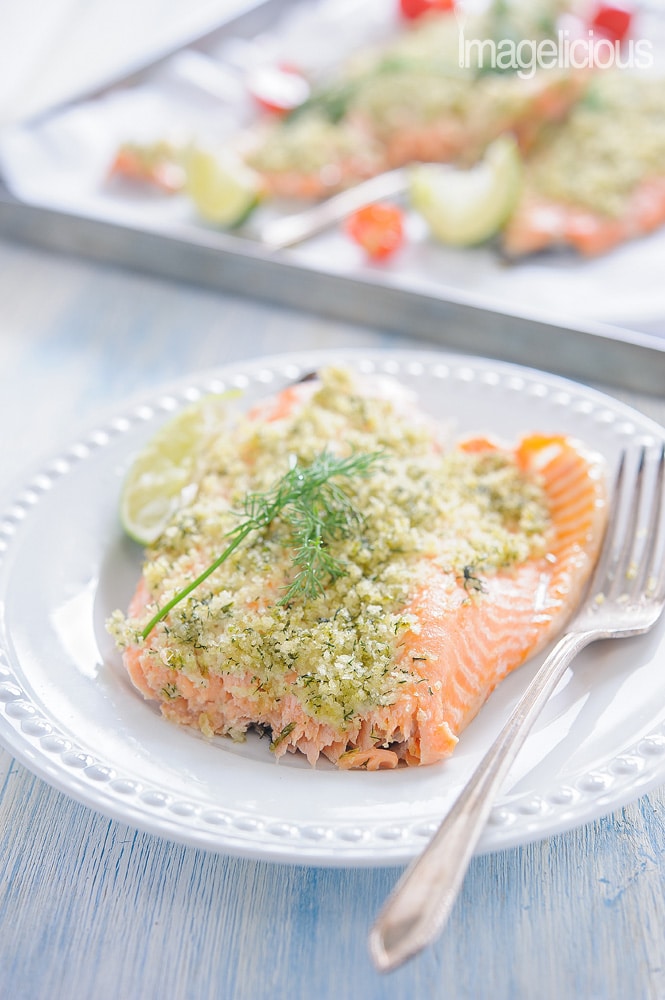